Swimming Before The Crack Of Dawn 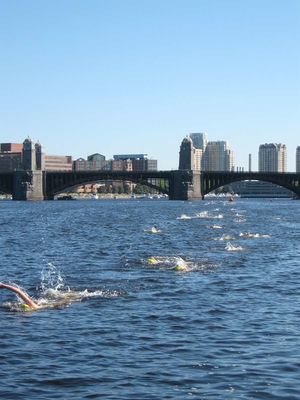 But he had to swim in the Charles River, a slow-moving meandering river that emptied out into the Boston Harbor, for various reasons.

His summer racing plans demanded that he train like never before. With 5 marathon races scheduled over a 6-week period, he needed to get in the optimal physical and mental shape. The 36.2 km Around the Island Swim in Atlantic City, the 32 km Traverseé international du lac St-Jean in Roberval, the 34 km Traverseé internationale du lac Memphrémagog in Magog, the 38.6 km Cabo San Lucas International Swim in Mexico, and the 45.8 km Manhattan Island Marathon Swim was as packed a summer schedule as he could possibly devise.

First and foremost, he needed massive amounts of open water training. Just swimming back and forth at the 50m Blodgett Pool on the Harvard campus was not sufficient. He needed to practice and push himself in difficult situations in order to perform well in those five races. He needed to train in water without walls. He needed to think in hours, not meters, when he swam.

Secondly, he had crossed the Charles River for four straight years from his dormitory on one part of the Harvard campus to the athletic facilities on the other side of campus. Thousands of times, back and forth over the bridge, he stared at the Charles River wondering what it would be like to swim in the forbidden river. The Charles took on various characteristics throughout the year. It ranged from a winding river framed by the colorful leaves of autumn to a white frozen mass in winter. In spring, the speed of its current seem to speed up with the melting of the snow while in summer, things seemed to slow down as the heat and humidity became oppressive and seemed to press down on the river’s surface.

The Charles seemed to call him, inviting him to challenge himself swimming upstream and then enjoy the speed of a downstream return.

But the Charles was off limits. It was illegal to swim in the Charles. But more than illegal, it was unthinkable due to the pollution and his fear of Master Heimert, the authoritative administrator who ruled Eliot House, his dormitory.

And that was a powerful motivation for his plans. Because swimming in the Charles could not be done, it had to be done. Because it was wrong according to local laws, it seemed so right as an adventure. He wanted to transform a no-you-can’t to a yes-I-did.

But there were far greater risks than getting arrested by the Cambridge police. There was Master Heimert. If he crossed Master Heimert, then he could get kicked out of the university. Getting kicked out of school was worse than being arrested. An arrest would be a social stigma, but after all those tests, homework, papers, and hours of study, he could not face being expelled. And Heimert was the master of his academic universe.

Which made it enticing. Really alluring. In a twisted mind of a marathon swimmer desperate to train, he reveled in facing the risks of arrest and academic suicide…and getting away with it.

So he made a plan. And he told no one: not his roommates, not his teammates. Nary a word to his parents and not a peep to any classmates. His swim would be completely confidential. A total blackout of information. The risk of telling anyone was too high. The last thing he could afford was for anyone to leak the information.

On the first day, he easily woke up before the crack of dawn. He could hardly sleep through the night as he began to question his own sanity and carefully mull over the risks. But he used the cloak of darkness to maintain confidentiality. Night swimming was his means to an end. The collegiate rowers would be out early on the Charles, but not that early. They needed the light of the early morning to row safely. To avoid being caught, he would simply swim before the sun rose. He would rather face darkness than the Cambridge police or Master Heimert.

He had scouted the Charles for the perfect rendezvous. He selected a location where he could hide his clothes and enter the river without anyone noticing. He planned to jump in on a moonlit night and just start swimming parallel to shore no more than 10 meters off the shoreline. Swimming out in the middle of the river was too risky to be seen and would require time for him to escape if he were seen A few runners might be out, but the last thing they would expect was a student swimming in the Charles. Even the splashing of his arm strokes should not attract attention for the sounds of arm strokes would be completely out of place in a darkened river. The sound, so foreign, would be totally unexpected and most probably ignored by runners.

So he wiped his eyes, munched on a banana, and grabbed a clear pair of goggles and a black swim cap. He changed into his shoes and running shorts. He would disguise himself as a jogger along the river banks and then dart into the Charles like a Navy SEAL. As he left his dorm room with his slumbering roommates completely unaware of his plans, the Charles environs were eerily quiet with the dawn’s light hours away.

He took less than 10 minutes to run to his predetermined secret location. It was an easy jog, but he started to sweat profusely while his heart raced. Fortunately, no one was around the jogging paths that line the Charles. There some light traffic along the streets, but no one was looking for a college student training for a marathon swim. No one could possibly imagine – or approve – what he was up to.

When he stopped by the hedge of bushes near the banks, his skin was clammy and cold to the touch. He slowly stripped down to his swimsuit, swiveling his head at every sound. He looked around constantly, more worried about the specter of facing Master Heimert than the risks of swimming in a polluted river. He put on his black swim cap and adjusted his goggles. A black swim cap was his way to convince himself that he was now stealth. He figured all that was missing was camouflage paint. If there was ever a time to jump in, now was the time.

He skulked in the water as quietly as possible and was surprised to find the water warmer than he expected. He knew where he wanted to swim, but he didn’t want to create ripples or a wake. But it was too late to go back now. Now it was time to execute his plan.

It was dark with only a bit of light from the city and street lights reaching the Charles. But he had picked a good night to swim. The moonlight created silhouettes out of the trees and shrubs along the shoreline. This would help with his navigation even with the blackness. Tonight was unlike any other. Normally darkness was a hindrance to a swimmer, but the cloak of darkness was now an enabler.

He dropped his shoulders to the water’s surface, took one last look around, and then took off upstream. He felt free, but he also felt scared. But as the Charles contours meandered through Cambridge, so did he. He swam parallel to the banks as best he could. He swam and swam, planning to train for an hour on that first night. He was occasionally surprised by a floating branch that popped up in his path, but the swim was completely stealth. It was only him and the Charles, like two long-lost friends who finally met. After 30 minutes, he decided not to push his luck and risk being caught. So he turned around and swam back. He knew exactly where he stashed his clothes and got out safely while evading capture.

And he did it over and over again. Quietly and confidentially.

Dial forward some 30 years later. Open water swimming is now an Olympic sport and tens of thousands of open water swimming event take place including the Charles River Swim. The former swimmer with a long-repressed relationship with the Charles read newspaper accounts that the river is now open to the public for time since the 1950’s.

From sneaking into the Charles in the pre-dawn mornings to publicly enjoying the river in the light of day in front of the media, the environment sure has changed for the better. A swimmable Charles: surely a time for celebration.

For more information on the Charles River Conservancy, visit here.