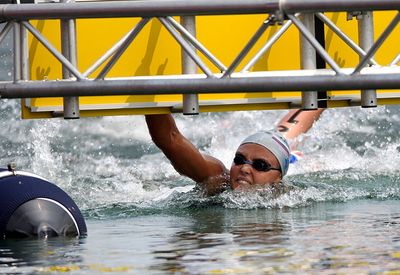 Aaron Peirsol is one of the greatest backstrokers in swimming and Olympic history – and an outstandingly creative ocean man and body surfer. He participated in the 2000, 2004 and 2008 Olympic Games, winning five gold and two silver medals and still holds three long course world records – as part of the USA’s 4 x 100 meter medley relay, and in the 100 and 200 meter backstroke events. During his career, he won a total of 36 medals in major international competitions, 29 gold, six silver and one bronze. He retired in 2011 saying, “I ended up doing everything I set out to do.”

Monique Wildschut was the dominant 6-time World Professional Marathon Swimming Federation champion from 1983-1988. In 1983 she was the overall winner of the Atlantic City Marathon and was second overall in the 64 km Traversée Internationale du Lac St-Jean in Canada. As a solo swimmer, she crossed the English Channel twice and had the fastest swim of the year in 1984.

Desmond Robert Des Renford, M.B.E. was born in Australia on the 52nd anniversary of the very first English Channel swim, achieved in 1875 by Captain Matthew Webb. He took up marathon swimming only at the age of 39 and from 1975 to part of 1980, he crossed the English Channel a remarkable 19 times in 19 attempts and wore the title King of the Channel despite living half a world away. For his exploits in the Channel, he was awarded the M.B.E., Order of the British Empire. He will be enshrined posthumously.

For ticket information to the 52nd Annual International Swimming Hall of Fame ceremonies and Paragon Awards on October 28th – 30th in Santa Clara, California, visit www.ishof.org or contact Bruce Wigo at +1-954-462-6536 extension 201, or via email bwigo@ishof.org.