Swimming From Alcatraz For The First Time 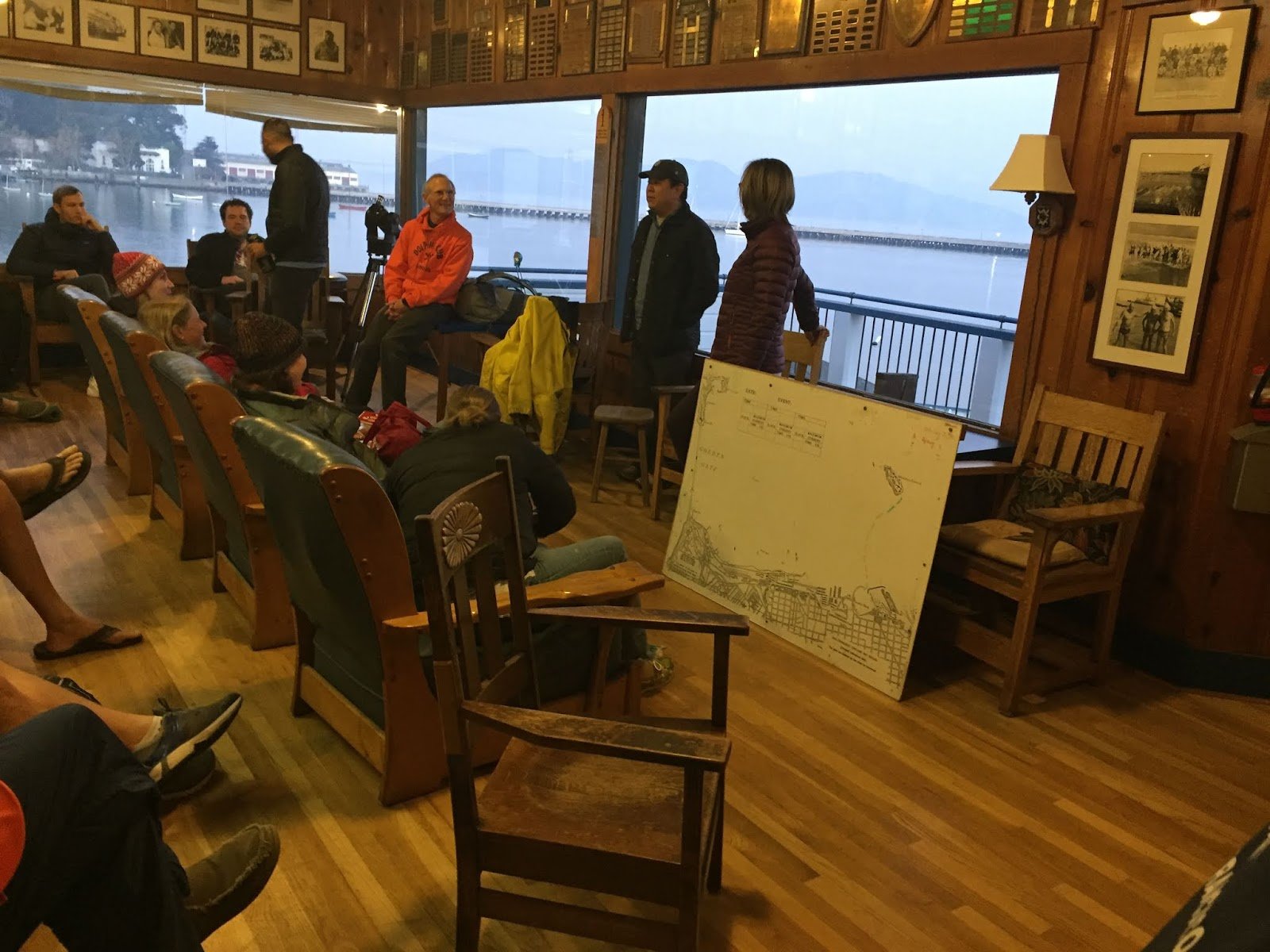 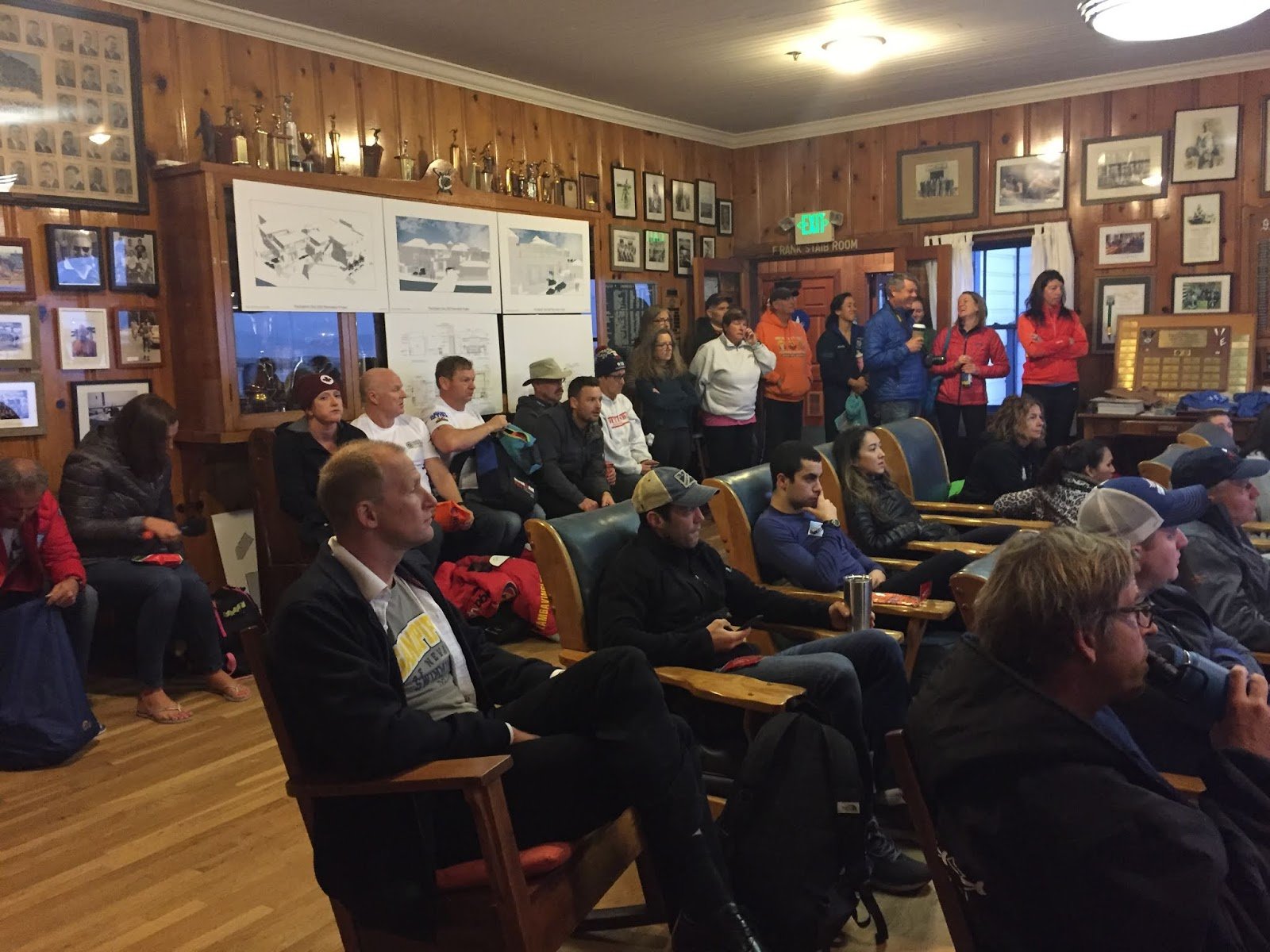 The 2018 Open Water Summit attendees were invited to sign up for an Alcatraz Island swim. The swim was a 1.5-mile swim from Alcatraz Island to Aquatic Park finishing at the Dolphin Club where the final event of the Summit was held.

The event was limited to the first 50 swimmers to register for the 5:45 am assembly in the famed boathouse and open water swimming epicenter of California.

The night before the event I realized I had left my swimsuit, swim caps, and goggles at the Olympic Club. I could not get my swimming gear in time, but I decided to go to check-in anyway at the Dolphin Club. At worst, I could always swim in my underwear.

I was the sixth person to arrive and immediately recognized half of the people standing around from the previous days of talks. I asked a former Navy SEAL named David Loeffler from Arizona if he had a swimsuit that I could borrow and he immediately said yes.

I still didn’t have a swim cap and I saw a bucket of orange caps, but they cost $4 and I had a $1 bill and a $100 bill, and I could see they didn’t have change. Then a lady came up and introduced herself as being from the area and having swum the event before. We chatted and made friends and then I mustered up the sheepish request for a swim cap. She immediately said “Yes”. Ok, 2 for 2. I want to be a part of this group.

The swim did not begin until 7:30 am and I had a flight at 11 am out of the Oakland Airport. I decide to swim anyway because this was the first time in my life I had the chance to swim from Alcatraz. This has been a bucket list item of mine since first learning about the penitentiary as a teenager.

I made friends with JC from Washington D.C. who had checked in before me. He knew a lot about politics and even knew ex-Senator Dean Heller and a few of the current representatives from Nevada. I was embarrassed that I still needed a pair of goggles, so I didn’t bring it up. The conversations were great and soon it was time for the course explanation.

We went upstairs to the ready room and we were informed the water was 57.4°F (14.1°C). Quite a bit colder than the 60°F I had hoped. They handed out orange caps for safety. I tried to return the borrowed cap to the lady, but she insisted I keep it in case I wanted to double-cap. What a great idea.

In the ready room, a woman from the audience announces, “During the race, stop and look around at the beauty of the location.” Another good idea. I set a plan to do that. I started down the steps, but made a wrong turn and ended up separated from the group. Quinn Fitzgerald, a World Open Water Swimming Association board member and the Open Water Summit host, popped in and asked me if I needed help with directions.

How in the world did he know I was going to be lost?

We were out getting ready for the boat and more chatting occurred. I figured out how we ate up all the time. We kept talking with the most interesting people in open water swimming. On the way out, I had a chance to talk with my new friends, take pictures of the sun rising over San Francisco, and take pictures of the south side of Alcatraz.

Aaron Peirsol, a 7-time Olympic medalist, looked very casual on the way out considering his recent work in the warm waters of Costa Rica. I finally got the courage up to ask for goggles, but the two people I asked did not have any. The only thing weirder than me asking for goggles was the fact that they apologized for not having any extras. As if they somehow let me down. Obviously this was a very close group who treat each other like family.

Soon enough it was 7:29 am and we were getting the 10-second countdown to the start: when Antonio Argüelles runs off the boat into the water. I delayed a few seconds wondering just how cold the water is and then jumped in maybe 10th in the water. So the cold of the water promptly constricted the muscles in my chest to the point where I was taking tiny little breaths.

How do the ice swimmers handle this? My mind raced. Keep my head up. OK, let’s go with that. 10 strokes, still tiny breaths. OK, now what? More head-up freestyle. OK, but I can’t do head-up freestyle for 1.5 miles, right? Well, I don’t have goggles, let’s start with that. Ok, now 1 minute in and I am exhausted. I try putting my head down, still no big breaths.

Finally, I have a flash idea. Backstroke. OK, so I start swimming backstroke. This works great except for 2 issues: 91) I don’t swim backstroke fast, and (2) I can’t see where I am going. People are catching up to me. Well, I decided to do backstroke for a couple minutes. My chest finally relaxed and I rotated over to do freestyle. Ah-ha. Breathing normally. Great.

So I start swimming and I see one swimmer well far ahead of me. At least one swimmer was faster. I start taking my favorite strokes, long, powerful, relaxed strokes. After five minutes, I check behind me and I have put 25 yards on the next swimmer behind. Fine, keep swimming. Another five minutes. Uh-oh, I forgot. I am not in shape. Seize the opportunity and the convenient excuse to look around. I pop my head up and … beautiful.

At the finish line I am handed the Popsicle® stick labeled “3”. I overheard from one of the handlers that the first two swimmers were Dolphin Club swimmers. That makes me the first non-Dolphin Club member across the line. Of course, with all the help I received and all the friends I made, I think the real winners are everyone involved in the open water swimming community.

Quinn was the host of a great event. Antonio brought the fun mariachis, wine, and tequila. Aaron Peirsol was very approachable and down-to-earth. All the Guinness World Record holders and WOWSA Award recipients were wonderful. I look forward to attending the Open Water Summit every year in the future.

Photos above show the participants of the Alcatraz swim technical meeting in the Dolphin Club, headed by Ryan Utsumi.