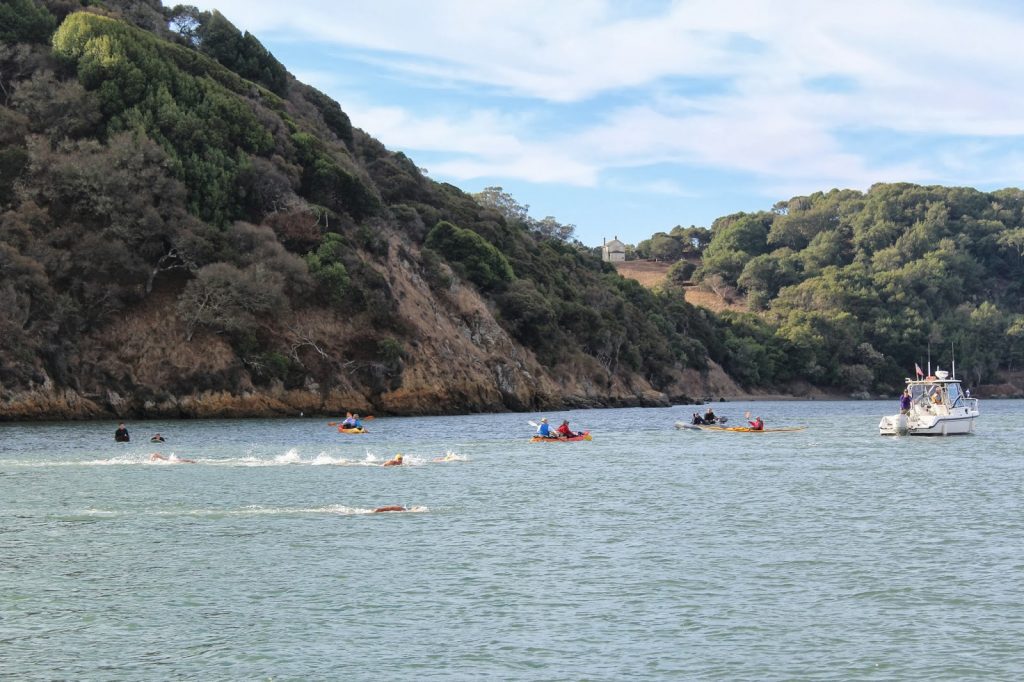 A post-race analysis of the competition between Mateusz Sawrymowicz of Poland and Ous Mellouli of Tunisia was enjoyable to discuss with the competitors.

The two men – teammates at the Trojan Swim Club in Los Angeles – took two separate and distinct courses from the start to the finish across San Francisco Bay in today’s RCP Tiburon Mile.

Without a doubt, Mellouli swam the straightest course.

Once out of the cove in Angel Island, the 3-time Tunisian Olympic medalist took a beeline to the finish. “I had a great line with the landmarks ahead. I stuck to my strategy and just went straight across.”

On the other hand, Sawrymowicz took a more parabolic course, a slow curve across San Francisco Bay with the majestic Golden Gate Bridge in the background. “I was correcting my line along the way,” as he kept on making judgment calls vis-a-vis his competition, the finish, and the currents. The lateral spread between Mellouli and Sawrymowicz eventually got up to over 150 meters in mid-channel. But as the men took their completely divergent routes, it became clear how much of an effect the shifting current would have on the competitors towards the end. It appeared that Mellouli had a slight edge after he shot out from the finish with the Polish Olympian hot in pursuit, but the shortest route eventually proved not to be the fastest.

As the swimmers moved in the deepest part of the channel, the water moved laterally across the path of the Tunisian and Polish swimmer. Eventually, Mellouli had to slightly fight a bit of the lateral tidal flow while Sawrymowicz rode the current to the finish in a purposefully slightly arching course. It was that navigational decision that ultimately led to a 16-second victory. So in this particular case on this particular course with these particular currents, Sawrymowicz swam further, but he also swam faster.

Photo shows Ous Mellouli closest to camera while Mateusz Sawrymowicz is in the middle and Kane Radford is swimming on everyone’s far left in the early stages of the race.