Swimming, A Healthy Lifestyle And Mindset

CALIFORNIA. Erin Strout of Experience Life writes about how swimming can help establish a lifetime of health, fitness and vitality. While Erin focuses on the benefits of swimming laps in a pool, a growing number of swimmers understand that the human brain is emotionally energized by the open water.

In effect, open water swimming gives you a double-dose, a double punch of physical health and mental well-being.

Wallace J. Nichols (see below) is delving into this BLUEMiND phenomena, a look at the ocean through the field of neuroscience. His research takes him to meet fishermen and to coastal villages where he encounters people with a common appreciation for the ocean’s beauty, abundance and mysteries. 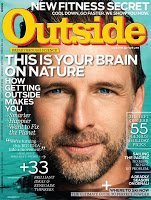 “We have the power of happiness on our side,” is one of Dr. Nichols’ comments that are easily understood by the open water swimming community.

The empirical evidence to prove this point is overwhelming – across borders, cultures, ages, generations, genders and bodies of water. Check out the decibel level of an open water swimming event at the start of a race and the completion of a race. The amount of conversation, laughter and emotion, among both friends and those who have never met each other before, is vastly greater and louder after a race than before. Swimmers talk about their common experiences and the level of camaraderie and mutual respect are tremendously enhanced.

Check out the level of emotion and ties that bind a group of individual before a solo swim or marathon relay before the start and after the finish. For swimmers and their support crews, solos and relays are life-altering events that produce strong feelings and positive emotions throughout their lives.

Open water swimming changes the before from the after, another indication that Wallace’s observations and beliefs are spot on.