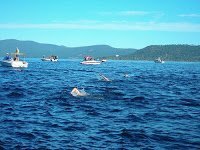 The Trans Tahoe Relay, held annually in Lake Tahoe between Nevada and California at 1,897 meters (6,225 feet) altitude, is one of the World’s Top 100 Open Water Swims.

The 18.5 km (11.5-mile) Trans Tahoe Relay course is conducted along the width of the lake from Sand Harbor Beach in Nevada to Skylandia Beach in California.

Because of the 12.7-15.5°C cold water (55-60°F) and altitude, participation in the Trans Tahoe Relay demands the hardiest type of open water swimmer, especially since wetsuits are not allowed.

In 2011, the 35th version of the Trans Tahoe Relay will take place, but relays are not the only open water swimming challenge conducted in Lake Tahoe where an increasing number of traditional marathon swimmers have plied their trade. In many ways, the Lake Tahoe challenge is similar to the Molokai Channel in terms of difficulty and the number of successful solo swimmers.

Karen Rogers describes the lake, “Swimming Tahoe is an amazing experience. The color of the water and the clarity is incredible. I have seen shades of blue in the water that I didn’t even know existed.”

And similar to the increasingly cold Catalina Channel, swimmers in Lake Tahoe may be in for a cold spell for the next few years. According to recent forecasts for Lake Tahoe’s water temperature is expected to be 5°F less at its peak from previous years.

Local escort pilot Dean Moser, who has been boating on Lake Tahoe for over 25 years, said, “Swimmers go from south to north [in the lake] is because the winds come primarily from the south and if they have to endure them it would be best if the waves pushed the swimmer.”

8. In July 2004, Laura Colette swam the lake a second time from the Hyatt Beach to Camp Richardson in 12 hours 2 minutes, which is the only north-south swim.

In August 2005, 39-year-old Brucker Chase of Santa Cruz, California swam 20.53 miles in 11 hours 16 minutes from Camp Richardson to Kings Beach. Brucker said afterwards, “I finish this feeling humbled, not invincible. I’ve never not finished anything. I thought about getting out, but I didn’t want to let (my support crew) down. I watched my dad suffer through an illness for 15 years. I’ve got this legacy of people who I admire who endured more than I did just swimming across the lake. I wanted to make sure I could live up to that and until I had given everything I had, I wasn’t about to (quit).”

Ken’s swim marked the longest route across Lake Tahoe according to the U.S. Coast Guard. With the air temperature at 4°C (40°F) at the start, Ken admitted, “There I was standing in the water, thinking to myself ‘This is nuts. You’re 45 years old, what are you doing? What is wrong with you?’ I was so nervous to get started. But once I did, it was very calming. Once I got that pace just past mile 14, I knew I was going to make it. The people in the boats were holding signs out letting me know where I was at. I thought I had a chance to break that guy’s time from last week. But then the final two miles came and I knew that was going to be tough.”

12. In August 2009, Tom Linthicum became the first person to swim in the difficult north-to-south direction in over 17 hours.

14. An anonymous swimmer from the USA successfully swam in 2009.

17. In August 2010, 39-year-old Clark Bird, swimming mostly at night in the rare north-to-south direction, complete a one-length swim in 13 hours 23 minutes from Incline Village in the north to Camp Richardson on the south shore to set the current north-to-south record.

Two early pioneers who swam the width of Lake Tahoe include the following swimmers:

In August 1931, 34-year-old Myrtle Huddleston swam 10.48 miles in 22 hours 58 minutes from Deadman’s Point to Tahoe City. A September 1931 article in Time Magazine on Myrtle’s swim can be read here.

Fred Rogers who blazed the Tahoe trial in 1955 recalls, “My friend had tried it before me and gave up after maybe 12 hours in the water. He said it was an impossible feat. But, I had all the confidence in the world I could do it.”

And, all these Lake Tahoe swimming heroes did.

Information partly compiled by Karen Rogers. Photo of the Trans Tahoe Relay by VKC. Records are maintained in the International Marathon Swimming Hall of Fame>.