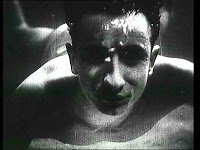 International Marathon Swimming Hall of Fame inductee Harry Huffaker made some insightful comments about the swimming style of Jean Taris, a champion swimmer from France of the 1930’s. In Swimming by Jean Taris, the Olympic swimmer and 29-time French champion explains the mechanics of the crawl, breaststroke and other swimming techniques.

The slow-motion, close-up and underwater photography are wonderful to see. “I found it very interesting and entertaining with an ending Hollywood would be impressed by. Some of my observations include the following.”

1. Straight arm recovery in freestyle was common, but to the side, not over the top.
2. Flip turns were used in sprints in freestyle with the hand touching the wall.
3. Briefs and full body suits were both worn in competition.
4. The six-beat kick in freestyle was commonly used.
5. Heads were held extremely high on free and back and breaths were taken with a quick jerk of the head and on either side.
6. The trudgeon kick (last used by Roy Saari in 1964?) was also used in distance freestyle.
7. The breaststroke was brand new.
8. Based on the starts I see why it was called the “Trophy Start”.
9. On his weird underwater corkscrew maneuver, but not sure why he did it, he actually has a pretty good streamline with hand over hand which was way ahead of his time.
10. Backstroke with a bent arm recovery (a la Adolph Keifer) flat swim with hands breaking the surface on each stroke and head up in the clouds.