Swimming In Hawaii From Point To Point 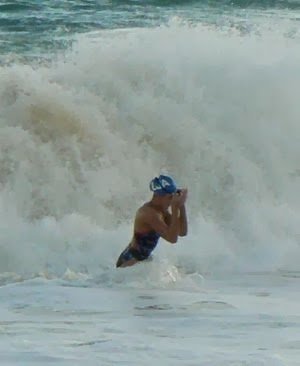 Michael Miller of Oahu broke down a channel swim in Hawaii for his daughter Mackenzi in 3 fundamental steps: walk in, swim across, and walk out.

But the English Channel, Catalina Channel, Molokai Channel and Maui Channel swimmer knows there is much more behind the planning and execution of a successful channel swim, especially an inter-island crossing in Hawaii.

Jeff Kozlovich of the Kaiwi Channel Association explains in more detail about how best to plan and prepare for a successful Kaiwi (Molokai) Channel crossing through 10 basic recommendations:

His detailed explanation is posted below.

1. Get to Waikiki Beach on Oahu.
2. Meet with your support crew and talk over all your concerns.
3. Pick the day of your swim.
4. Put things on the boat including bottled water and glow sticks.
5. Decide on where to stay on Molokai.
6. Get to your escort boat.
7. Decide on your swim start, either La’au Point or Kaluakoi Resort.
8. Swim across the channel.
9. Finish somewhere along the potentially dangerous shore break.
10. Make it official by filling out a WOWSA Observer Report.