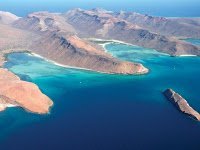 Known by a handful of global traveling swimmers, La Paz Bay in Baja California is one of the best places in the world to do open water swimming.

With wonderfully clear and aqua-blue waters filled with marine life, the location is cold in winter and warm in swimmer and beautiful year-round.

With 244 islands and inlets in the Sea of Cortez (Mar de Cortes) under UNESCO protection as World Heritage Bioreserves, the Isla Espíritu Santo group are considered the crown jewels, the primary tourist destination of the area. 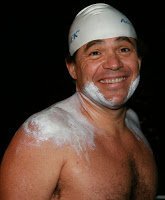 Triple Crown swimmer Antonio Argüelles of Mexico did a 40K 12-hour swim from the coast to Isla del Espiritu Santo in 1999. “Yes, it was a long swim, but it was pretty enjoyable. We started at dawn from La Paz, at a place called Marina Palmira and arrived 12 hours later to the Isla del Espiritu Santo at a beach known as El Candelero,” explained Antonio.

“The swim took place in a water that was 23°C. There was a false alarm caused by a sword fish. My escort boat team thought it was a shark.”

“I have done other swims around the area, mostly night swims to get used to swimming at night. It was always fascinating seeing the sun rise in the company of sea lions.”