Swimming In The Sailors’ Graveyard 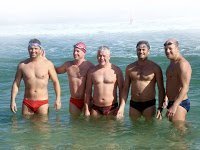 Their swim include the world’s first attempt at an open water swim around Cape Horn.

Cape Horn is the southernmost headland of the Tierra del Fuego archipelago of southern Chile. They will be swimming in the hazardous Drake Passage due to strong winds, large waves, strong currents and icebergs. Known as a sailors’ graveyard, this swim is so perilous and so risky that it boggles the mind.

But Ram Barkai (53) and crew from Cape Town – Andrew Chin (41), Toks Viviers (47), Kieron Palframan (36) and Ryan Stramrood (37) – have prepared well for this. They consistently train in Cape Town, South Africa in 12°C (53.6°F) waters or less, no matter what the conditions are. Just swimsuits – no wetsuits, no neoprene, no swim caps even. “We started swimming without swim caps a few years ago and found that this helped us prepare for extreme swims,” said Ram.

Open water swimmers talk about windy conditions, but what the Patagonia extreme cold water swimmers will face is something entirely of a different order.

The winds in latitudes below 40° south can blow from west to east around the world almost uninterrupted by land, giving rise to the “roaring forties”, the “furious fifties” and “screaming sixties”. These winds are hazardous enough in themselves that ships traveling east would tend to stay in the northern part of the forties (i.e. not far below 40° south latitude); however, rounding Cape Horn requires ships to press south to 56° south latitude, well into the zone of fiercest winds. These winds are further exacerbated at the Horn by the funneling effect of the Andes and the Antarctic peninsula, which channel the winds into the relatively narrow Drake Passage.

The strong winds of the Southern Ocean cause large waves that attain enormous size as they roll around the Southern Ocean, free of any interruption from land. At Cape Horn, these waves encounter an area of shallow water which makes the waves shorter and steeper – together with an occasional rogue wave which can attain heights of up to 30 meters.

In the 3°C (37.4°F) water, there is not much room for error especially as they simultaneously face the currents and williwaw (sudden gale force winds) that is strong enough to overturn their escort boats. Fortunately, one of the islands has a Chilean naval base at its southern tip…but very little else.

The team will have to spend two days at sea travelling 110K to get to the tip of the Cape Horn – the site for their anticipated 30-minute, 3°C one-mile swim.

“This will be a huge mental challenge,” said Ryan. “The Magellan swim is three times the distance of the Fraserburg mile and that was incredibly tough.”

Andrew added, “This has been a dream for a while. It’s about pushing the limits both physically and mentally and seeking to achieve new pinnacles in swimming. We know we’re aiming high by attempting three of the world’s most extreme swims in less than three weeks so we’ll be elated if we complete just one of them.”

Ram frankly admitted, “We don’t know how capable we’ll be, both physically and mentally. Some of us have considerable experience in cold water and we’re aware that this could be the biggest swim challenge we’ve undertaken so far. An ice swim is considered by many as more taxing on the body than an entire Ironman triathlon as it saps huge amounts of energy and requires intense mental focus. To attempt one ice swim a week for three weeks will be an interesting challenge. It will test us to the limits but it’s all in the mind. I truly believe a human being can do significantly more than the body thinks it can, simply by applying the mind.”

The swimmers depart Cape Town for Cape Horn on February 11th. The open water swimming community will be following them here. Photos of the team can be seen here.