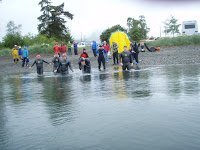 A week after swimming her third Pennock Island Challenge in Alaska, Claudia Rose of the La Jolla Cove Swim Club and a Team Aquaphor member, became the first person to swim across the Sitka Sound from Kruzof Island to Halibut Point in Alaska. She took 4 hours and 36 minutes to cross the Sound in 54˚F (12˚C) water, leaving a deep impression on those who she lived in the area.

This week, Claudia is back in Alaska where she helped establish a new swim in Sitka.

“We had a great clinic today with about 20 Sitkans attending. Seven of these intrepid souls went on to swim a lap or two of a nearly one-mile course in incredibly ugly conditions. Although they chose to don wetsuits with the water temperature dropping to the high 40’s with the air the same, it’s an exciting day for Alaskan open water. The swimmers would like to start a local open water swim club.”