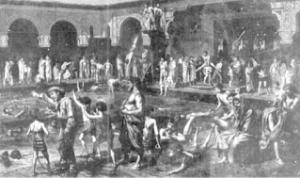 Courtesy of Tim Johnson, History of Open-Water Marathon Swimming. Captain Tim Johnson, PE discusses pools in his book, History of Open-Water Marathon Swimming. “The scene of the swimming bath in Paris is from the pages of Harper’s Weekly, drawn by Simon Durand. The pool is crowded so that you could surmise that the engraving is a compendium of scenes the artist saw over time.  Prominent is the swimming master on the left giving instruction to a young child. To his charge’s left in the water is another student using what appear to be water wings for support. Directly across the pool is another instructor with his charge in the water. In the illustration of a swimming bath on the Seine in Paris, published 1873, shows the security of the rope to which their youngsters are tethered. This is one-on-one swimming instruction. Behind the swimming instructor are two children having a great deal of fun pushing each other into the water and off to their right come two other urchins running.  About the tank are patrons shrouded in robes, most standing, but on the right are two gentlemen evidently warming up and drying off after their bath. The diving platform looks to be about 3 meters in height. Notice the forward dive captured in mid-flight indicating that this tank has some depth. Two young boys are playing leapfrog at the pool end while off over their shoulders is seen either a distant attached room or mirrors.  Lap swimming appears non-existent, but the one gentleman seen with the robe gathered about his waist near the child sprawled upon the deck in the foreground probably wants to go back in, but finds the pool too crowded for his tastes.  There are lifeguards present; they are the individuals with the kerchief tied about their neck, two of them are the instructors and a third is seen at the base of the diving platform exactly where you would expect to see one stationed. 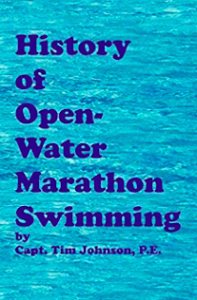 In the water, the patrons are floating, swimming, splashing (one fellow is kicking with his feet), and conversing about the pool edge. And just maybe, someone is swimming freestyle on the far side approaching the steps, but the image is so small that it could be sidestroke. It is hard to tell. What is not hard to tell is that there are no women in the drawing. They come on another day.” This look back at the swim environment and early attempts to teach swimming, plus other stories can be found in History of Open-Water Marathon Swimming available here. A donation will be made by author Captain Tim Johnson, PE to help support the activities of the International Marathon Swimming Hall of Fame. Copyright © 2008-2019 by World Open Water Swimming Association