Swimming In The Milky Clear

Swimming In The Milky Clear

The Rhône is a mighty river which is born in the upper valley of the Swiss canton of Valais. The Rhône Glacier sheds its liquid offerings from the heart of the Swiss Alps and its waters gain power and girth as they flow down into the belly of beautiful Lake Geneva, also known as lac Léman. The lake is huge and deep.

The water which flows from the Rhône, will settle and hibernate in this gigantic, crescent shaped lake which spans 45 miles in length and reaches a maximum depth of 311 meters. Once the water is ready to be set free, it will run through the city of Geneva where multiple bridges and pedestrian pathways traverse the clear greenish-blue water.

As the waters of lac Lèman regain their river Rhône identity, there lies a magical surprise as the waters approach an unforeseen meeting with its newest partner, a milky brown river from France called L’Arve.

In a small locale, just a small walk from the shores of Lake Geneva, there is a place called La Jonction (French for “the junction”) where the milky-white waters of the river Arve meet for the first time the deep green waters of the Rhône. The river Arve originates from multiple glaciers of the French Alps near the famous ski resort commune of Chamonix. Its waters tend to be rich with white sand and silt, creating the milky appearance.

The first time I saw the phenomenon of the two rivers dancing together, it reminded me of my childhood when I would watch my mother make chocolate milk with syrup and a spoon. She swirled the liquid chocolate slowly as the milk consumed its rich color into a new blend of hues which I rarely observed for long, as I slurped it down immediately.

There are two perfect spots to watch the greeting of the Rhône and L’Arve…the first is literally at the point where the two rivers meet. It is found by walking through a tight-knit section of streets of La Jonction. It is a humble area of age-old apartments and a bus and trolley depot sharing the same name. As one walks down a pedestrian walkway, you can spot some areas which appear prime for a swim.

Grass covered strips along the walkway are found literally right on the river Rhône. Additionally, some semi-abandoned small boat docks await, perfect for a spring or summer launching pad for a quick dip. The second place to see this milky-mix is found by walking from the Rhone side or L’Arve side and exploring up the tree covered banks until the pathways lead diagonally to a train bridge which crosses over this beautiful scene, and acts as a perfect observatory. The viaduct allows for passage on foot, and when you arrive at the spot where the waters begin their mix, you can see from a 50 meter view a most intriguing spot to swim…

Swimming in this beautiful spot always required some preparation. The flow from L’Arve is usually at the mercy of the flow from Lake Geneva. The waters which exit the lake are controlled by different river locks. Every time I would swim in this incredible spot, I needed to first think of safety, and prepare where I would exit after the swim. For most swimmers, the current of both rivers is much too strong to swim upstream…I, however, always accepted its challenge. With a pair of large swim fins and sometimes a wetsuit to help with flotation more than warmth, I would slide down into the clear water of the Rhône and prepare my attack. 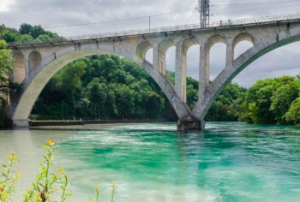 I would let the current work in my favor and slip down to where the two rivers started their partnership.

From the point on land where the two rivers meet, to the base of one of the mega arches of the train viaduct, there is a submerged, man-made wall which serves as a guide to help the two rivers meet in a more peaceful way, and prevent any erosion on either of the river shores.

The underwater wall acts as a perfect guide for a swimmer as well. I would think of it as a black line on the bottom of the world’s largest counter-current swimming pool.

I would usually last just a few minutes swimming against the incredible current. I remember several times, as I was mesmerized by the swirls of blue-green-white and tan, I would hear cheers from the shores. Other swimmers and passersby would encourage me to win…a battle I never won.

Sooner or later, due to fatigue or simple respect, I would turn-tail and float downstream to one of the sandy beaches along the newly created Rhône 2.0.

There are so many beautiful places to swim on Mother Earth: oceans, lakes, rivers, and ponds. But, there are a few small, unknown and underrated places which remain magical and worth visiting.