Swimming Ocean To Ocean, Across The Panama Canal 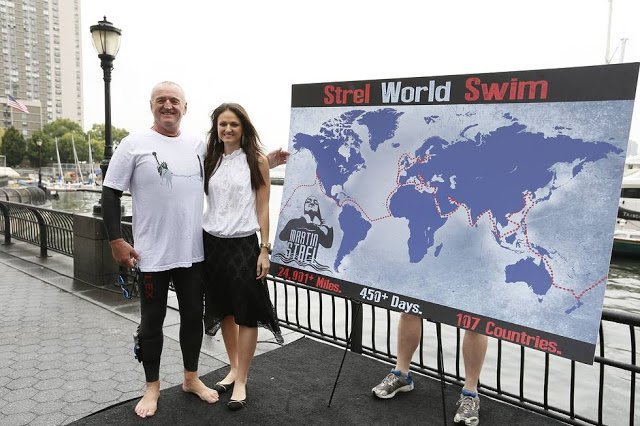 The 450-day stage swim will cover the Atlantic Ocean, Indian Ocean, Pacific Ocean, the Red Sea, the English Channel, the Suez Canal and the Panama Canal while Strel swims between 5 and 12 hours every day.

Even more so than the actual act of swimming, Strel must navigate the finances and logistics of pulling off the planning for his World Swim. One of the many areas where he must plan and negotiate well with the local authorities is the Panama Canal.

There have been various stage swims and attempts to complete this ocean-to-ocean swim.

In 1913, Captain Alfred Brown (aka Captain Allan Borran), a lifeguard from New York who described himself as the champion long-distance swimmer of the world, together with Elaine May Golding (aka Hellen My Golding) who was billed in the press as the champion lady swimmer of America made a partial 10-day stage swim across the Panama Canal from Cristobal to Balboa bypassing the lochs in an era before the canal was fully opened to boat traffic in December 1913. Their permit required them to skip Gaillard Cut, then known as Culebra, which still was closed to ships as well as swimmers.

Captain Borran swam 20 miles in November and then two days later swam 10 more miles to cover a total of 30 miles in 16 hours 35 minutes. Golding swam breaststroke from Cristobal to Balboa in several stages, although her attempt did not include a swim through the locks.

In 1914, Panama Canal employees J.R. Bingaman and James Wendell Green, who were Panama Canal employees, started a stage swim on August 22nd and completed their 45-mile crossing on October 18th after 26 hours 34 minutes in the water. Governor George W. Goethals granted Bingaman and Green permission to swim through the locks chambers and climb up the ladders at the ends at a time when the locks are not in use as long as the operation were not interfered. They swam freestyle in stages including the loch chambers only on Sundays and other times they were off work.

In 1928, American travel writer Richard Halliburton swam the length of the Panama Canal, swimming 50 hours total in the water over a 10-day period while escorted by a rowboat. Governor M.L. Walker granted him persmission to swim along with a small launch, a cameraman, a newspaper reporter and an expert rifleman. Charges for the passage were made in accordance with the ton rate, and Halliburton, weighing 150 pounds, paid US$0.36. After his successful ocean-to-ocean crossing, he wrote the book New Worlds to Conquer that was published in 1929 by Bobs-Merrill & Company and included a chapter entitled ‘The SS Richard Halliburton’ that gave a very detailed and anecdotal description of his swim.

In 1936, two U.S. Navy men stationed at Coco Solo including Marvin Beacham and Regis Parton planned to make the first non-stop swim from the Atlantic Ocean to the Pacific Ocean. They were to be accompanied by two U.S. Navy launches carrying men with rifles and a net insure their safety against fish, alligators, suction and other accompanying dangers. The project was ultimately canceled.

In 1950, Charles McGinn, a U.S. Military Academy cadet of the class of 1953, completed a 6-day stage swim in June from Pier 6 in Cristobal, spending about 36 hours total in the water escorted by a rowboat manned by Robert Kariger. He spent approximately 5 hours each day swimming, finishing at Balboa Yacht Club pier.

In 1958, 52-year-old Captain Robert Legge, the 15th Naval District Medical Officer, swam 35 miles in the Panama Canal from Gatun to Pedro Miguel in October in a time of 21 hours 54 minutes. He was charged US$0.72 in tolls, the rate for a 1-ton vessel in ballast.

In 1959, 32-year U.S. Army sergeant George W. Harrison sponsored by the First Battle Group of the 20th Infantry swam from Gatun to Miraflores Locks over a 2-day period on 12-13 May 1959 in 22 hours 52 minutes, stopping for rest and food and walking around Pedro Miguel.

In 1962, 42-year-old oceanographer Albert H. Oshiver from Washington, D.C. swam from south Gatun to Gamboa in 29 hours in 30 December. He was escorted by a motor boat and a cayuco paddled by Pedro Torres.

In 1966, Indian marathon swimmer Mihir Sen crossed the length of the Panama Canal from the Atlantic Ocean to the Pacific Ocean in two stages with a total time of 34 hours 15 minutes in October.

Next up, Martin Strel on his World Swim.