Swimming On A Kona Day 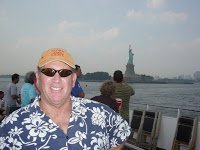 Winds during any open water swim can be tough and frustrating.

Channel swimmers Anne Cleveland and Michael Miller describe how they face the winds, currents and tides on their marathon swims. “I completely agree that surface conditions can destroy a channel crossing much more than tides, currents, up to a certain point.

“However, being pushed with a current, but swimming into waves or whitecaps is demoralizing. You are hit, over and over and over, and pretty soon, the fact you are with the current is totally irrelevant. Being smacked in the face thousands of times requires much more mental stamina.”

“In 1979, Ian Emberson and I successfully crossed the Molokai Channel. Emberson had previously attempted the [26-mile] crossing [between Oahu and Molokai] twice before, but a moderate-to-heavy trade wind swell and chop took their toll and he came up short. We decided we would pay NO attention to tides, currents, but we [waited and] wanted a Kona day (glassy conditions) because we were in great shape and knew that we could swim a long time, even against challenging currents. BUT, we could not handle getting pounded by a heavy surface chop for 12-16 hours or more.

The conditions [on our chosen day] were glassy, but at the onset at 2 am, we swam into a vicious current against us. But because it was dark, we didn’t know and our crew didn’t say anything to us. At sunrise, about 6 am, we could see Molokai right behind us – knowing we had gone maybe 2 miles in 4 hours. This didn’t phase us because once the currents switched, we had very glassy conditions and swam right across.”

Cleveland, a five-time English and Catalina Channel swimmer, said a variety of factors present obstacles, “I have done all of my English Channel swims (one two-way and two one-way) on the spring tides. I was unable to tell the strength of the tides down in the water, however my escort pilots were very aware of the tidal flow as they charted my course. Several hours of being pounded by white caps does take its toll on a swimmer. Wind chop takes a lot of core strength to power through as I found out on my swims. [But] there is another factor which I have seen slow swimmers down: cold. Loss of fine motor control makes feeding difficult, which can lead to dehydration, often a precursor to hypothermia. I have seen swimmers deal with hours of wind chop, but once the cold sets in it is often the beginning of the end of the swim.”

Winds, whitecaps, cold water, tides or currents. Marathon swimmers never get to pick their poison and sometimes have to deal with it all.