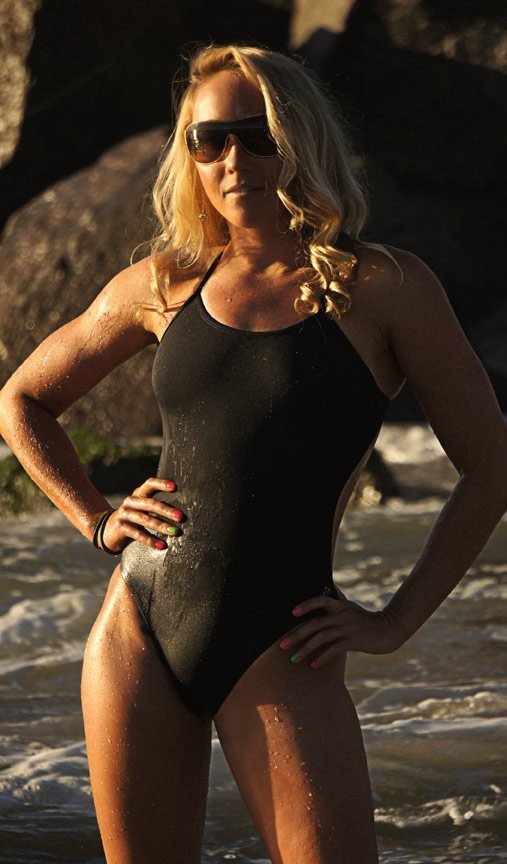 Competing in the FINA Open Water Swimming Grand Prix circuit is an honor and opportunity that is not available to all the estimated 8,500 active marathon swimmers around the world. But for those young and fast enough, the experiences usually rank among the most memorable and unique swimming experiences the athletes have had in their aquatic careers.

Lexie Kelly from Long Beach, California is participating in her first season as a professional marathon swimmer. She describes what it is like on the pro circuit, starting with the Maratón Acuática Internactional Ciudad de Rosario in Rosario, Argentina.

“Swimmers gathered from all over the world to compete on the FINA Open Water Swimming Grand Prix circuit. I came from Long Beach, California. The flight to Argentina from California is very long. When I sat back and took a look at the globe, my destination is further south and east than I ever realized with a 6-hour time difference. I arrived in Buenos Aires in the morning. The race director from Rosario made arrangements to pick up the swimmers at the airport.

This service was a lifesaver as I had never been to this part of the world. Without their help, I would have been very confused as the airport. The activities and energy in Buenos Aires is more hectic than I am accustomed to back home. The price for the transport was very reasonable (US$55 for a 4-hour drive. The driver who waited for me at the airport had my name on a sign. Despite all of the chaos in the airport, it was surprising how fast he found me. Between his limited command of English and my Spanish, we were able to communicate. We stopped by a second airport and picked up another swimmer. I’m the kind of person who likes to talk and ask questions, especially when I am in a new place so we did our best to carry on a conversation throughout the 4 hours. Despite the fact that we were so far away from home, it was unbelievable how much the two-lane freeway reminded me driving up to my mother’s house in northern California. Within a short span of time, the three of us became friends and we still keep in touch on Facebook
.

When we arrived at the hotel, I was given a room and envelope with my name with a list of swimming locations and the available times, as well as vouchers for lunch and dinner at a restaurant just down the street. I had no idea how far the swim spots were so I quickly got online and found them. I had 30 minutes to unpack before the first swim session so it was a good time to work out the jet lag as soon as possible. The 6-lane pool was at an indoor club at the end of a dark hall. The lane lines were literally ropes.

There were only two athletes in the pool, but I did not know them. We tried to talk, but there was a huge language barrier between my English and their Russian. But we had the common bond as competitors. After workout they kindly showed me where the restaurant was to eat dinner and we struggled using body language. I knew enough Spanish to order some pollo (chicken). Despite our lack of a common language, we got along really well and spent the next day together. The other athletes arrived later in the week, but I knew when the Italians arrived because in the middle of an afternoon workout, I smelled the strong scent of expensive cologne.

The next couple days were spent between training in the pool, eating breakfast at the hotel, and having lunch and dinner at the restaurant down the street. When the other swimmers arrived, we all worked out together making the pool feel like a washing machine which was fine because we were all open water swimmers. Pilar Geijo arrived the Thursday before the race and asked what time I’d like to meet her for dinner. I suggested 6 or 7 pm to which she asked, “Why so early?” In Argentina, 8 pm is the earliest they even think about eating dinner as opposed to that time when I am starting to put on my pajamas and brush my teeth for bed. It made sense because I realized how long the days were with the sun not starting to set until 8:30 pm. Having a friend in Pilar is extremely great because she is experienced and knowledgeable about the race and fluent in Spanish and English.

We didn’t have many obligations in Rosario in the lead-up to the Maratón Acuática Internactional Ciudad de Rosario other than an introduction to city officials and an outing to go see the venue and watch a local swim team swim of 100 children swim in the river for their first time. It was so much fun because the kids really made you feel like celebrities. They all wanted to take numerous pictures with all of the swimmers. This was also my first time seeing the Paraná River where the first event would be held. The water was very silty and the color of chocolate milk. I have swam around the world, but I had never swam in brown water.

Normally, I’d want to get in to get a feel for what the currents would be like, especially since swimming in a river was a new experience for me. But swimmers got sick in this river before so I didn’t want to take any chances. Watching the kids swim was enough for me. They all seemed very excited about it. There were very proud and you could feel their sense of accomplishment after they swam. With one more day until the race, all the athletes trained in the pool and socialized. Although we would be competitors in 24 hours, everyone was friendly and respectful of one another. I met some new friends from Argentina, Italy, Croatia, Macedonia, Russia, Bulgaria, Venezuela, and Ecuador as we traded country caps, stickers, and shirts with each other.

A pre-race technical meeting was held to go over the course details, rules, etc. The course was a combination of swimming up and down current in a 7-loop course in the river where we had visited the children. There were not only worries about swimming so close to the shore along a cable where the spectators are known to try to touch the swimmers during the race, but also a huge concern about the water quality. The water quality was given a D rating on January 22nd and the race was held on January 27th.

With this in mind, the organizers were not even sure the race could take place. My coach Mike Collins arrived right as the meeting started after a long trip from California so it was nice to have another American there with me. Mike was also concerned with the water and went straight to the FINA Medical Delegate to ask what precautions we could take if the race did occur because the water quality being so poor. The doctor suggested that I start taking probiotics as soon as possible. Unfortunately, it was too late in the evening so the pharmacies were closed, but I started taking the probiotics as the FINA doctor recommended.

The athletes took physicals the next day to make sure we were in good health to compete. This included basic health questions and a check of our blood pressure and temperature. By this time, the organizers told us the race would go on as scheduled because the water was now a B rating. Apparently, they had previously tested the water in a different location in addition to stopping the drainage of sewage that was pouring into the river.