Swimming On Top Of The World’s Highest Volcano

The Madswimmers are leaving South Africa on November 23rd for their attempt at the world’s highest open water swim.

A group of 7 Madswimmers, 2 medics, 4 support climbers, a tour guide, and a cameraman will head off to Argentina’s Mt Ojos del Salado in the Andes mountains in their attempt to accomplish the highest altitude swim in the world.

“The team will take along chain saws to cut open a swimming lane in the ice if the lake is frozen. A medical team will be available to assist with emergencies as the combination of hypothermia and altitude sickness can cause acute health problems,” explains Nicolene Steynberg. “They will hike up a volcano in the Atacama desert that will take 8 days, so dehydration is a real risk, while they will also be extremely remote – 500 km from the closest large airport in Copiapo.

Why? For children in need. Madswimmer supports various registered children’s charities and hopes to prove to the world what normal people can do when they put their minds to helping others.”

The high-altitude swimmers Jean Craven (Madswimmers founder), Milton Brest, Evan Feldman, Chris Marthinusen, Herman van der Westhuizen, Robert Graaff, and Juandre Human will attempt to complete a high-altitude swim across Ojos del Salado in December 2015 at 6,400 km (20,997 feet) above sea level. The Ojos swim is part 1 of 2 of the Hi/Low Swim Challenge: Ojos will be the highest swim and the Dead Sea from Jordan to Israel will be the lowest open water swim next year.

For more information, visit The Highest Swim or www.madswimmer.com. 100% of all donations benefit charity – every rand. 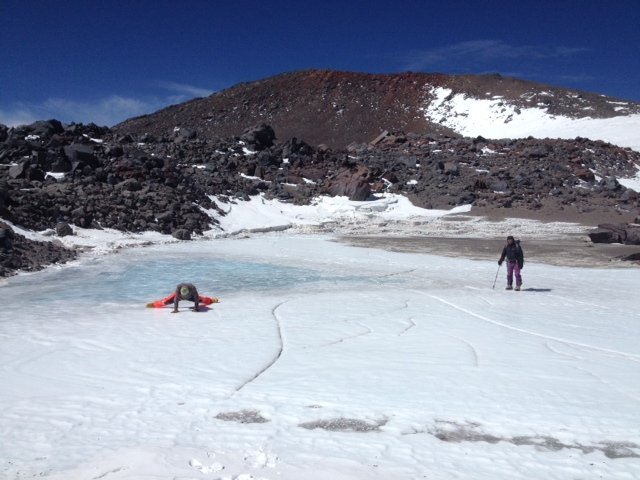 Photo by Adventure Dynamics International show the lake iced over.