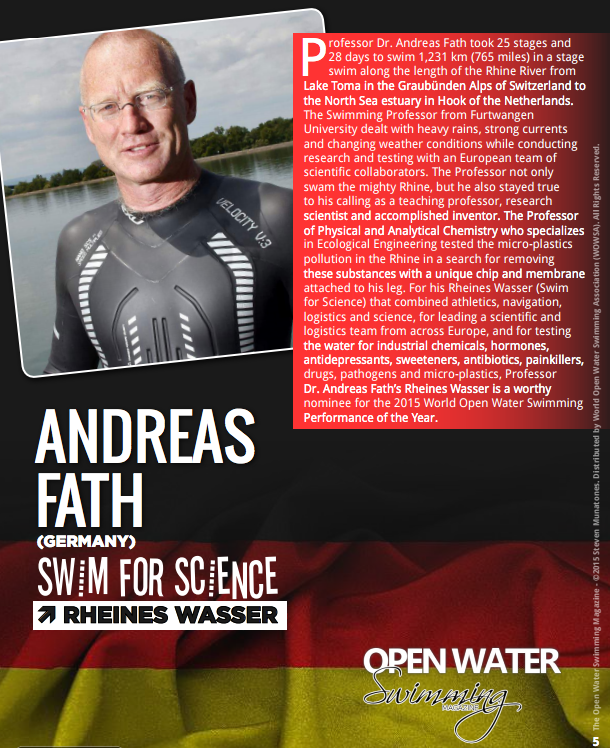 Professor Dr. Andreas Fath of Germany is nominated for the 2015 World Open Water Swimming Performance of the Year for his 25-stage, 28-day 1,231 km (765-mile) stage swim along the length of the Rhine River from Lake Toma in the Graubünden Alps of Switzerland to the North Sea estuary in Hook of the Netherlands.

The Swimming Professor from Furtwangen University dealt with heavy rains, strong currents and changing weather conditions while conducting research and testing with an European team of scientific collaborators. The Professor not only swam the mighty Rhine, but he also stayed true to his calling as a teaching professor, research scientist and accomplished inventor.

The Professor of Physical and Analytical Chemistry who specializes in Ecological Engineering tested the micro-plastics pollution in the Rhine in a search for removing these substances with a unique chip and membrane attached to his leg. For his Rheines Wasser (Swim for Science) that combined athletics, navigation, logistics and science, for leading a scientific and logistics team from across Europe, and for testing the water for industrial chemicals, hormones, antidepressants, sweeteners, antibiotics, painkillers, drugs, pathogens and micro-plastics, Professor Fath’s Rheines Wasser was a truly noteworthy adventure and scientific endeavor. 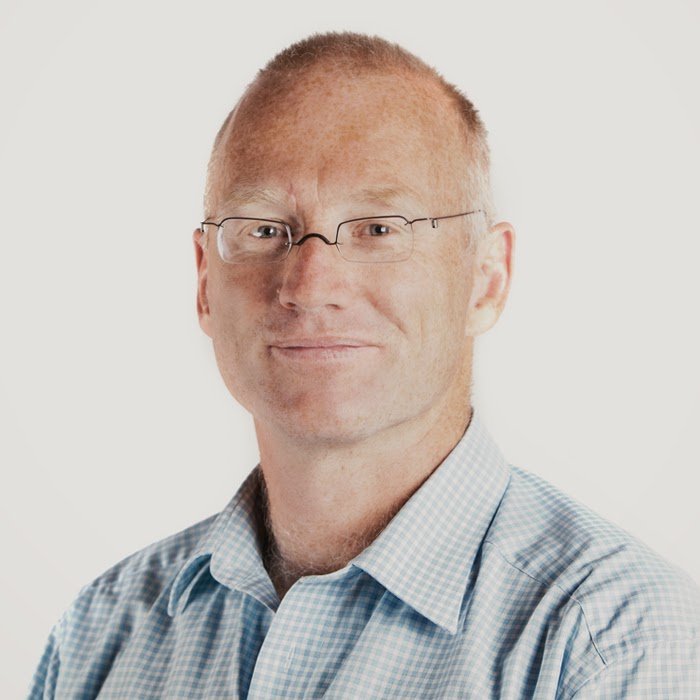 Back in 1969, Austrian adventurer Klaus Pechstein attempted to swim 1,231 km (765 miles) in an assisted (wetsuit) stage swim along the entire length of the Rhine River from Switzerland to the Netherlands. He made a valiant attempt in an earlier era, but he was forced to abandon his attempt somewhere in Rotterdam.

Time passed before The Swimming Professor took up the challenge.

The Professor not only swam the mighty Rhine, but he also stayed true to his calling as a teaching professor, research scientist and accomplished inventor. While Professor Fath swim from Lake Toma in the Graubünden Alps of Switzerland to the North Sea estuary in Hook of the Netherlands, he also conducted 28 days of unprecedented research in the Rhine.

“Yes, I am a bit crazy,” laughs Dr. Fath, a Furtwangen University Professor of Physical and Analytical Chemistry specializing in Ecological Engineering about his 1,231 km Rheines Wasser (Swim for Science). But he is also as inventive and inspirational as he is crazy.

“As a long-distance swimmer, I am passionate about water which also explains my interest as a scientist. Of course, the river will test me, but I’m going to test the river, too. I’m interested in how good the quality of the water all along the Rhine is, between the Alps and the North Sea.”

His Rheines Wasser was an athletic, navigational, logistical and scientific challenge. He gathered a large scientific and logistics team [see below] of colleagues and students from Furtwangen University and partners from the Water Technology Centre in Karlsruhe, the Alfred Wegener Institute in Helgoland, the University of Bayreuth, the Swiss aquatic research institute EAWAG, and the Dutch centre of excellence for sustainable water technology Wetsus.

Dr. Fath took water samples taken throughout his 28 days in the Rhine and tested the water for industrial chemicals, hormones, antidepressants, sweeteners, antibiotics, painkillers, drugs, pathogens and micro-plastics. His project team also measured current speed, pH values, conductivity and the temperature of the water. “We collected a great deal of new scientific data including, for example, the level of micro-plastics’ pollution in the Rhine between the source and the North Sea. My real goal in the long run, after we analyzed the results of the Rhine measurements and determined the source of the pollutants, is to develop systems and processes which remove these substances before they even reach the water.”

While the former competitive swimmer spent a year training for the swim, he also prepared unique methods and instruments to test the water. He used a chip – that can detect up to 150 micro-organisms such as pathogens or bio indicators at the same time – and a special plastic membrane attached to the lower legs of his wetsuit in order to collected samples of the organic materials that he swam into.

The 25 stages of this swim included the following: 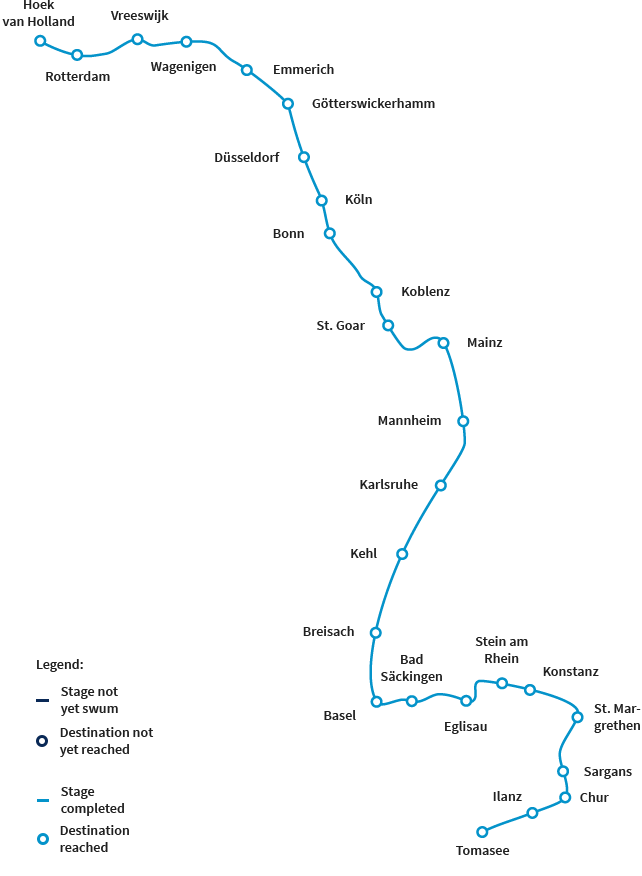 For more information on his stage swim, visit here.