Swimming Son Of A Swim, Lost in the Islands of Derby Bay 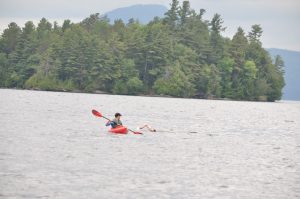 Swimming Son Of A Swim, Lost in the Islands of Derby Bay

Son of a Swim was started in 2009 to help new swimmers qualify for Kingdom Swim. But, over the years, the swim has grown and moved from Prouty Beach in Newport to The Clubhous in Derby. The swim now incorporates the islands of Derby Bay as its ‘turnaround buoys’ and offers the beauty and magic of this area of Lake Memphremagog.

This year, we changed the name of the swim to Lost in the Islands of Derby Bay, because there’s no place and no way we’d rather be on a summer’s day in the Kingdom.”

The Kingdom Games and the Northeast Kingdom Open Water Swimming Association next host In Search of Memphre in July and Kingdom Swim on July 27th, the NEK Swim Week from August 10th to 18th, and additional 25-mile solo and group swims In Search of Memphre.