Swimming Through Blooms Of Squids 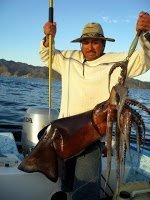 Mónica Ramírez Blancarte is part of the Sea of Cortez relay that has plans to swim for 30-40 hours in Mexican sea between Baja California and the Mexican mainland.

But she will not be alone in the water. Humbolt squids are in the millions and come to the surface of the water at night in the Sea of Cortez.

“They hug you in groups,” said Vito Bialla. “It is startling for some and kind of interferes with your stroke at 2 am.” 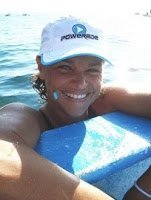 But Mónica remains fearless and excited about participating in the unprecedented relay.

“In 2004, I was a pacer swimmer for Patricia Guerra in the English Channel. A year later, I swam on an English Channel double-crossing relay, part of the first Mexican team to cross the English Chanel two way. I have been training specifically for this relay since last year with workouts six days a week, about 30K with a long swim on the weekend and monthly open water swim in different places in Mexico.”

Squid or no squid, Mónica and her teammates are determined to swim through the night and across the Sea of Cortez.