Swimming Through The Night With Vampires 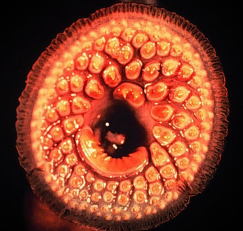 While the conditions appear between acceptable to ideal for the first solo current-neutral Century Swim in history, Thomas may encounter sea lamphreys, eel-shaped jawless parasitic fish with a skeleton made of cartilage.

The lamphreys feed using their small sharp teeth and a file-like tongue that attach to fish, puncture its skin, and drain its body of blood and fluids.

If a lamphrey or group of lamphreys attached (attacked?) themselves to Thomas, it would certainly be a surprise, but humans can easily wipe or pull the lamphrey off their skin.

The thought of something latching itself onto to a swimmer has got to be spooky, especially at night.

But Thomas has swum over 27 straight hours and 76.7 km (47.6 miles) on Day 1 since Monday morning and apparently without any significant problems – or running into the vampire fish of Lake Champlain.