Swimming To 300 For A Fellow Swimmer 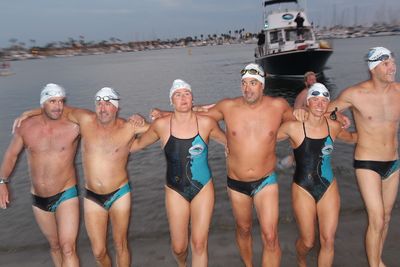 On September 6th, the Night Train Swimmers are on a mission for a beginner swimmer

This time in the process of helping raise US$100,000 to help Arthur Renowitzky walk again after being paralyzed by a gun shot wound to his spine, they will attempt to set the distance record for a 6-person open water swimming relay.

“Arthur was a normal 18-year-old kid when he walked to his car one night,” recalls Vito Bialla. “He was confronted by four youth and quickly shot over a $20 robbery. The bullet went in to his neck and he was in a coma for six days. When he woke up, he said he didn’t want to live given that he was paralyzed from the chest down.”

After hearing about Renowitzky’s unfortunate turn of events, Bialla turned to his fellow Night Train Swimmers and decided to head towards the water’s edge and do something on his behalf.

With water temperatures in the San Francisco Bay hovering around 55°F, Bialla and friends will try to reach the mythical 300-mile (482.2 km) mark while swimming non-stop around the San Francisco Bay. Adhering to standard English Channel relay rules, Bialla and five friends will swim continuously in 1-hour individual rotations for an estimated 5 days in a fund-raising attempt. In addition to setting a distance record [currently held a team from India, called The Sea Hawks, that swam for 269 miles (433 km) over 6 days off the Konkan Coast in western India), the team wants to raise money to help get Renowitzky literally back on his feet.

“Fast forward to seven years after his injury, Arthur has turned his life around and has become a Night Train Swimmer,” says Bialla. “Back in 2008, the founders swam their first relay across the English Channel. Then came all kinds of swims from the Sea of Cortez to Lake Powell with numerous accomplishments by the individual Night Train Swimmers. We continue to thrive, raising money for the Marines, Semper Fi.org, The Navy Seal Foundation, Wounded Warrior Program, Reed School District, Lighthouse Foundation and youth swimming programs in Marin City and San Rafael.”

Now it is time to help Renowitzky.

“This week on September 6th at 10 am near the San Francisco Yacht Club, the Night Train Swimmers will begin a six-person relay in an attempt to regain our world record for the longest relay ever. Our goal is to swim 300 miles non-stop. In the process, we hope to raise US$50,000 to be able to make Arthur walk again by outfitting him with a exoskeleton REWALK suit.

The suit allows him to walk around with simple crutches and a battery-powered body suit. Walking and standing up has been his dream for the last 7 years. The technology to walk is now here, but not inexpensive. Arthur is now so motivated that he has also become a role model for our children’s program.

Arthur has also spent some time in the pool lately and now has his sights set on a gold medal in the upcoming Paralympics. He didn’t know how to swim, but after a few lessons he rocks and we can barely get him out of the water now

Their progress onto the 300-mile mark can be followed at www.nighttrainswimmers.org. Donations can be made here. For more information on Renowinsky, visit here.

“As we near the finish, if you are a boater come out and follow us, start a parade and cheer us on,” requests Bialla. “We will be as far south as the Giants Stadium and as far north as Benicia. Tide willing and our endurance holding up, we will each swim some 50 miles in five days.”

“Our team of swimmers are some of the fastest and mentally toughest in the world and we pride ourselves in channeling this energy to give back to the community—this time to help give the gift of mobility to Arthur. Our swimmers include Grace van der Byl, Dave Holscher, Kim Chambers, Adam Eilath, Ashley Horne and me.”

In comparison to the Night Train Swimmers’ 300-mile (482.2 km) attempt, some of the longest relays over the last two decades include:

2011: Windermere 12-way Warriors was a 6-person relay that swam 202 km (126 statute miles) in a 12-way crossing of Windermere in the Lake District of England. The team included Liane Llewellyn, Thomas Noblett, Keith Bartolo, Michelle Lefton, Michelle Sharples and Dee Llewellyn who swam non-stop for over 3 days, a total of 75 hours 32 minutes from May 27th – 30th in 10°C water.

2014: Cyprus Israel Swim was a 6-man relay that swam 380 km (235 miles) from Cyprus to Israel in 123 hours 10 minutes. The team swam from Paphos Port Cyprus in Cyprus at 2:20 pm on October 5th and finished south of Rishon, Israel at 5:30 pm on October 10th and included Udi Erell, Doron Amosi, Ben Enosh, Ori Sela, Oded Rahav, and Luc Chetboun with a support crew of Erez Amir, captain Nimrod Or and Uri Brown.

2015: The Sea Hawk was a 6-person team who swam 433 km over a 6-day period in 156 hours between February 13th-19th. The Sea Hawk completed the charity swim on behalf of Project Nanhi Kali that supports the cause of education of the underprivileged girls in India and included Wing Commander Paramour Singh, Sergeant Gullupilli Narhari, Sergeant Ankar Kumar Patel, Leading Aircraftsman Vicky Tokas, Assistant Sub-inspector Ganesh Palande of the Mumbai Police, and Manav Mehta who swam from Dona Paula in Goa along the Konkan coast to the Gateway of India in Mumbai, India.