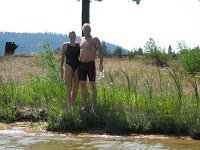 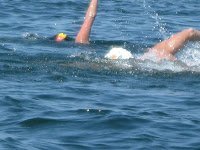 The Southern California pair has an interesting story on why they decided to do a two-fer (joint crossing) in the natural wonderland of the Idaho Panhandle.

Daily News of Open Water Swimming: Marathon swimming brings people together and the camaraderie of the sport is well-known, but how did you two get to know each other?

Cindy Walsh: Jim and I first met at the 2007 Catalina Channel Swimming Federation annual banquet. We started dating after our Catalina Channel swims in 2008. My training partner and good friend Kevin Anderson takes credit for setting us up.

Daily News of Open Water Swimming: Why did you chose Lake Pend Oreille in Idaho?

Cindy Walsh: Friends invited us to join them for the Sand Point 1.76-mile Long Bridge Swim in Lake Pend Oreille. It was an opportunity to do a longer swim supported by our friends. I wanted to use it as a fresh water training swim to prepare for a swim across Lake Tahoe.

Daily News of Open Water Swimming: How was your swim?

Cindy Walsh: We had planned to start at 3 am, but thunderstorms that night delayed our start until dawn. My final time was 9 hours 12 minutes and 30 seconds. Jim finished five seconds later. We started at just South of Pend Oreille Shores Resort on the East Shore near the town of Hope. We finished in Dover on the North Western Shore.

Daily News of Open Water Swimming: Was it difficult to swim together the entire distance?

Cindy Walsh: No. Since it was a training swim, to successfully complete the swim together, we planned to swim at the slower swimmer’s pace.

Cindy Walsh: My first Catalina solo was more difficult since I was in the water for close to 14 hours and the water temperature was 60°F (15°C) for the last few miles. Lake Pend Oreille was 70°F (21°C). I am pretty buoyant so the fresh water didn’t pose a problem for me. I trained several hours a week in the pool to prepare for fresh water conditions. The lake swim was more difficult for Jim due to the lower buoyancy in fresh water and he was not as well prepared: no pool or fresh water training since the February Fitness Challenge.