Swimming When The Ocean And Sky Were One 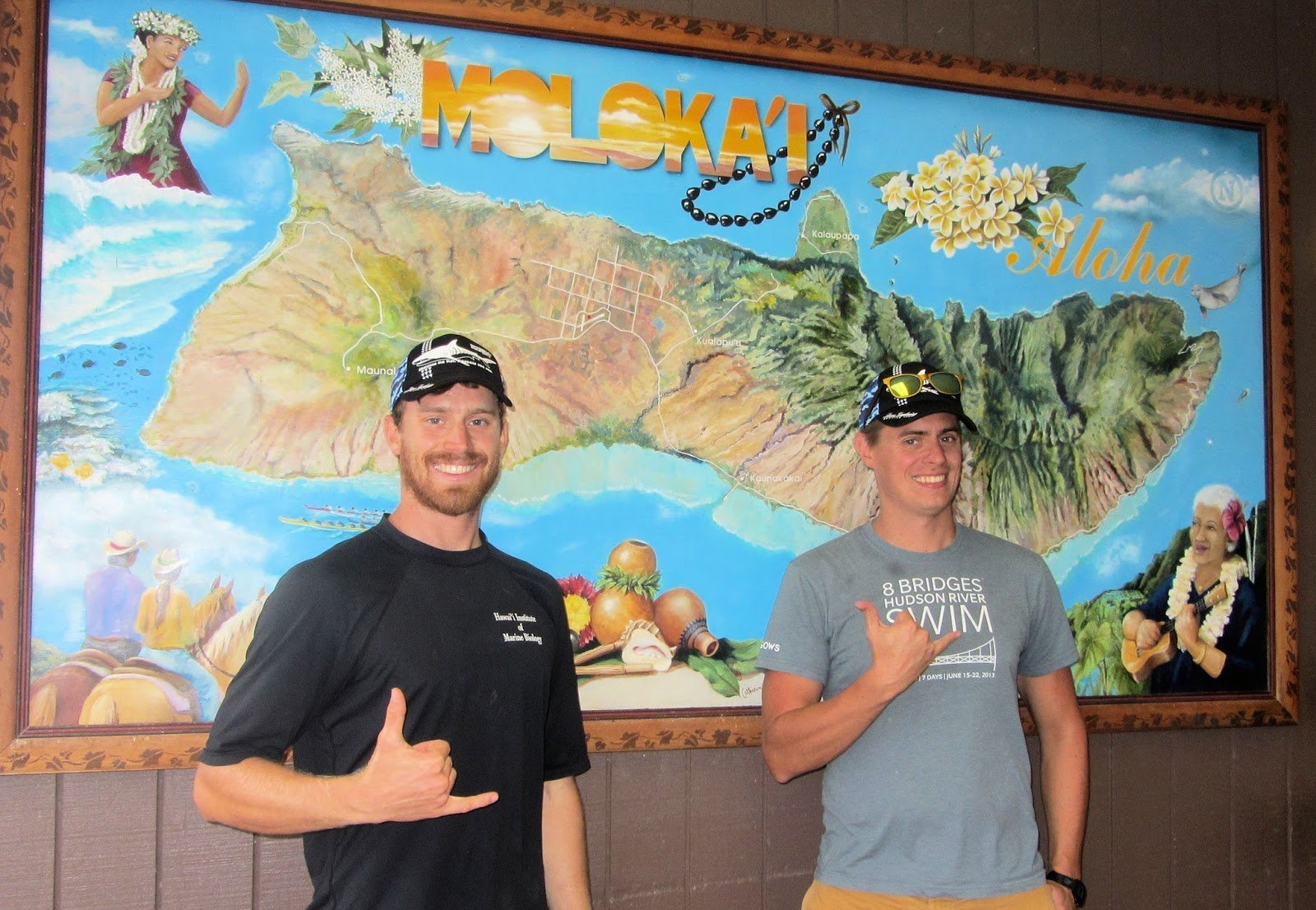 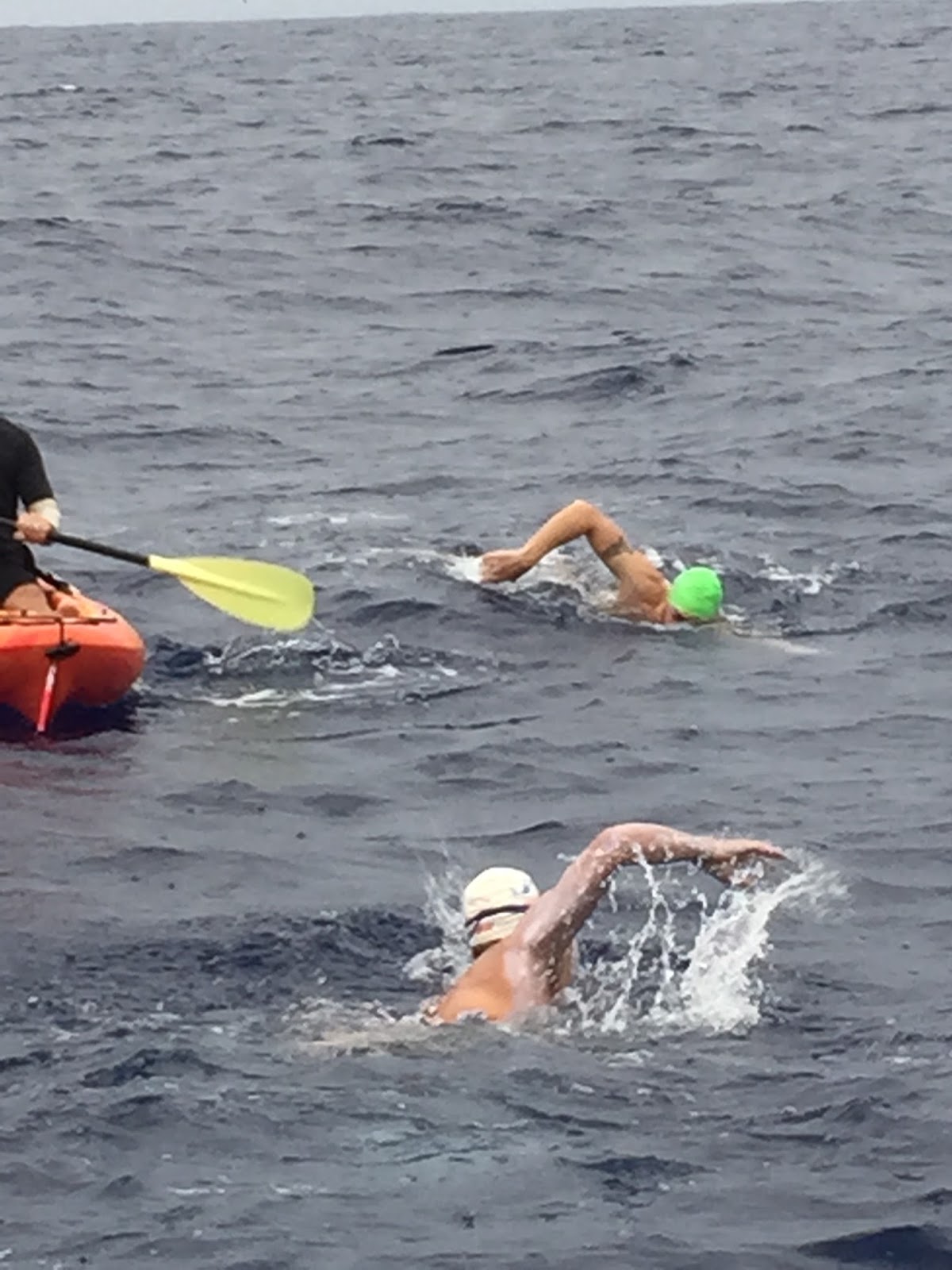 Few humans in history have experienced the Molokai (Kaiwi) Channel like Steve Haumschild and Jeff Kozlovich. Slowly and repeatedly, they have crossed the 26-mile (42 km) channel between Oahu and Molokai escorting a number of swimmers, many whom have made it across successfully and some who have not.

Every time out on the channel, there has been an adventure: sometimes scary, many times unexpected, always memorable.

Yesterday was no difference with the brother duo relay with 32-year-old John Royer and his younger brother Mark Royer.

“As always, it was an eventful evening,” recalled Haumschild. “Kaiwi is more than a channel. It is alive.

It’s the neighbors angry dog tied to a tree that you think you want to pet, but you know it will bite, and when you pet it, it bites you. It’s the kitty trapped in a corner. The one thing you know about Kaiwi, is that if you want to cross her, you better get into Beast Mode and be prepared to fight like you have never fought before. It’s not called the Channel of Bones for no good reason. Even the best swimmers in the world, can and will continue to get their face slapped and the door slammed on them on the way out.

Sometimes it’s not about how hard you try, she is against you. You need serious teamwork and full trust in the swimmers, kayakers and the boat captain.

The pre-swim meeting between Haumschild, Kozlovich and the Royer brothers stressed the potential impact of a hurricane coming to Hawaii.

“The Royer’s are scientists by trade. They are smart, analytical and opportunists. They swim because they truly love the sport and love adventure. Between Jeff, Mike Twigg-Smith, the boat captain, and myself, we saw a window of weather that looked to provide a reasonable opportunity for the Mark and John. We all as a team agreed on the window and put logistics on fire to pull off a Sunday start. It was off to the races at this point.

The forecast matched the observation on Molokai, and we were greeted with soft and calm seas with warm air. The Royer’s suited up and we got underway just before 7 pm Sunday night. It started off insanely beautiful. Inky black sky and inky black water made the perfect backdrop for an entire night show of bioluminescence. From the kayak looking at the swimmer, the trailing current looked like a comet. Every paddle stroke was also a light show.

We were off to a beautiful night with Mike at the helm, Jeff and I paddling and Mark’s girlfriend Keanu lending the boys much needed support back on the boat between swims. We moved into what I call “Channel Trance” or the silent harmony where everything just clicks and nobody needs to talk. Everyone trusts everyone and everyone performs while being mesmerized with the beauty of the tropical night ocean

But the channel was about to upset the harmonious symphony between swimmers and their crew.

“Around 1:30 am when Mark was in the water and I was in the kayak, we got sideswiped by a large system coming over the ocean. It started peacefully with some rain that further stirred up the bioluminescence, but within moments the precipitation turned into a torrential downpour. that caused flash flooding on Oahu.

Then the variable winds hit. My rough guess is that the winds were in the 25 mph range, but it was swinging all over the compass. This stirred up the waves, reduced visibility, and put us in an interesting position where we really could not see to navigate. We could not determine the ocean from the sky.

Mike reacted quickly and got the boat closer to us so we could at least try to see each other over the building waves. Mark looked at me, I back at him, and simply said, “Good to go, let’s swim through it.’

With no hesitation, Mark put his head down and turned on Beast Mode. Jeff and I have worked with Mike so many times that we know he has our backs and this was our beacon of light if we needed it.

Mark and John finally finished after 16 hours 28 minutes to the cheers of family and friends as they fought through the shorebreak.

Photos of their duo relay crossing are posted here.