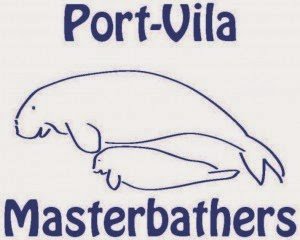 As president of the Port Vila Masterbathers Swimming Club, Oswald helps organize a group of ocean swimmers of all abilities who meet for a social swim on most weekday mornings, during lunch and on Saturday mornings at Port Vila’s seafront in the south Pacific island nation of Vanuatu.

Swimmers may encounter turtles, sea snakes, eels, nudibranchs, stingrays, tropical fish, and an occasional dugong or whale amid coral in all shapes and sizes.

There are no public swimming pools in the island nation, but the Vanuatu Aquatic Federation was established in 2014 in order to encourage swimming as a sport. To help with this initiative, the Port Vila Masterbathers are organizing the inaugural BRED Bank Masterbathers International Open Water Charity Swim on May 23rd 2015.

The BRED Bank Masterbathers Charity Swim will include 1 km and 2.5 km ocean swims.