Before she was known as a non-stop open water swim race director in Texas, Sandy Neilson-Bell was renowned as a fast pool swimmer.

Swimming World Magazine just named Neilson-Bell’s 100m freestyle gold medal victory at the 1972 Munich Olympic Games as one of the greatest Olympic upsets in history (see here). Swimming next to her more renowned rivals, Shane Gould and Shirley Babashoff, Neilson-Bell swam the sprint of her life to enjoy Olympic fame.

Now, together with her husband Dr. Keith Bell, she organizes a series of innovative open water swimming events in the Austin, Texas area under the American Swimming Association brand.

The 1972 Olympic triple gold medal sprinter made a comeback in the 1980’s by getting re-invigorated with open water swimming. She took a look back on a variety of topics, from her Olympic triumphs in Munich to her desire to create an open water swimming oasis among the rolling hill country of Texas.

Daily News of Open Water Swimming: Can you tell us a little bit about the 1972 Olympics?

Sandy Neilson-Bell: Wow — it was 36 years ago?! At 16 years old, so much just seemed to fly by me. 1972 was a very tumultuous year for the world with Vietnam, the Mid-East conflicts, and protests in our country. I was a naïve 16-year-old who was focused on swimming, school and friends. I lived in a cocoon, as many of us did, protected from the many aforementioned goings-on of the world.

My memories of the Munich Olympics are of the many exciting and controversial athletic performances as well as, of course, the terrifying hostility which resulted in 11 Israelis being murdered. I had been hosted in Israel the year prior to the Games and was extremely affected by this event. Prior to the terrorism, I was very focused on my swimming. That’s what we were there for, after all. At that time, there were minimal distractions from the media.

Daily News of Open Water Swimming: What was your best time going into Munich?

Daily News of Open Water Swimming: Did you think you could beat Shane Gould?

Sandy Neilson-Bell: I guess I did. There was huge hype about Shane — this “wonder girl” from Australia, who held numerous world records at that time. Looking back on it, I believe it affected the coaches and managers (and maybe other swimmers) more than it affected me. I usually didn’t pay attention to that kind of thing. My coach and parents were good at helping me maintain confidence under high-pressure situations. I also didn’t look at it as a race between Shane and me. The goal, as usual, was to touch the wall first ahead of everyone. And, up until the Olympics, I was focused on the excellent American competition I had in my own backyard.

Daily News of Open Water Swimming: In terms of stroke mechanics, did you swim differently then than you do now?

Sandy Neilson-Bell: My stroke is somewhat similar to then with a 6-beat kick, but when I was sprinting, I had an 8-beat kick with fairly long strokes. What was once thought to be a good dive (get out there, land flat on the water) and streamlined (arms in front of you like superman) is no longer. I have improved on those techniques.

Daily News of Open Water Swimming: Can you tell us about the 400 freestyle and 400 medley relays? Who were your teammates and your competition?

Sandy Neilson-Bell: We set the 400 medley relay in world record time by at least 25 meters with teammates Melissa Belote (gold medalist in the 100 and 200 backstrokes), Cathy Carr (gold medalist in the 100 breaststroke), Deena Deardruff (finalist in the 100 butterfly) and me anchoring freestyle. The 400 free relay was a nail-biter with me as lead-off, teammates Jenni Kemp and Janie Barkman (then the “old lady” at the age of 23) and Shirley Babashoff anchoring. Shirley started off behind, but finished strong to touch-out the East Germans, in world record time, but by only a fingernail. 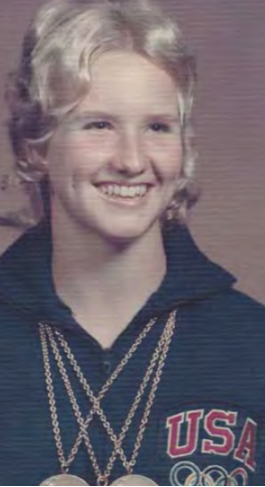 Daily News of Open Water Swimming: From an athlete’s perspective, what are some differences between the Olympics then (1972) and the Olympics now (2008)?

Sandy Neilson-Bell: There wasn’t such extreme media hype as there is now. You must remember that in 1972 we didn’t have computers or the Internet — huge advertising forces now. Some athletes got built up by the media, but it wasn’t in-your-face as much.

There was no such thing as “endorsements” by swimmers. Even track athletes were only just breaking into that scene. We ran strictly (and that was very strict) according to amateur rules. You couldn’t think of using your skill for profit or even get financial help for expenses. Of course, things like goggles, caps and swim suits are much different now. We were the last set of Olympians to wear the double-lined nylon suits. I did not wear goggles or a cap for my races.

Daily News of Open Water Swimming: Do you know Shane Gould is also very much into open water swimming now? Do you think her new event in Tasmania and your American Swimming Association events in Texas will ever become sister swims?

Sandy Neilson-Bell: I do know that Shane and her husband Milt are doing a great job promoting open water swimming in Australia. I think it is wonderful and would love to connect our swims somehow. And, definitely yes, it would be fun to swim with Shane!

Imagine that…two pool swimming heroes from the 1972 Munich Olympics – Sandy and Shane continuing their marvelous careers in the open water.

Swimming World Magazine article on her Olympic upset is here.