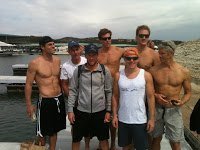 With an All-Star cast escorted by pilot John Korioth, SwimStrong lived up to its name near Austin, Texas earlier today at the 8th Annual Lake Travis Relay.