A Swirling Of Activity In The Ocean 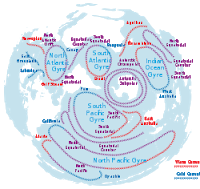 A gyre is any large system of rotating ocean currents, particularly those involved with large wind movements.

Gyres are caused by the Coriolis Effect; planetary vorticity along with horizontal and vertical friction, which determine the circulation patterns from the wind curl (torque).

The term gyre can be used to refer to any type of vortex in the air or the sea, even one that is man-made, but it is most commonly used in oceanography to refer to the major ocean systems.