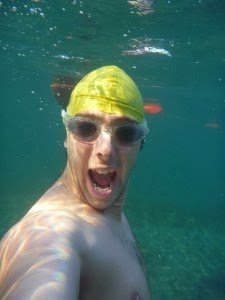 Sylvain Estadieu, The Flying Frenchman, just does it. He plans a swim, trains for it, and does it. Over and over again.

And not just any swim in 2013. But a really tough swim, an unfathomable swim for everyone in the world but a small handful: a butterfly crossing of the English Channel – only the third such crossing in history.

For his 16 hour 42 minute all-butterfly swim was selected as the 2013 Male Solo Swim of the Year by the Marathon Swimmers Forum (see the finalists here).

Words do not give his courageous swim justice, but his video below gives a hint of his extraordinary effort across the English Channel:

His effort was also nominated for the World Open Water Swimming Performance of the Year, an annual recognition of outstanding efforts by the world’s best open water swimmers. His nomination reads, “He publicly stated his goal; he trained diligently, and then stood confidently on the shores of Dover after long delays. Sylvain Estadieu was ready to tackle one of the most difficult feats in the ocean: 21 miles of uninterrupted butterfly, the most macho and most demanding of all swimming strokes. Double-arm forward, breathing straight ahead, legs together. One false stroke, one splitting of the feet, one breaststroke pull, one roll-over on his back, and his dream to become the third person in history to swim from England to France would be over. But he swam strongly and uninterrupted. For 16 hours 42 minutes of muscle-wrenching butterfly, for his courage in announcing his attempt and executing upon his plan, for his personable nature enhanced by his enjoyable, lighthearted approach to the sport, Sylvain Estadieu is a worthy nominee for the 2013 World Open Water Swimming Performance of the Year.“

Estadieu’s fellow nominees for the World Open Water Swimming Performance of the Year include: