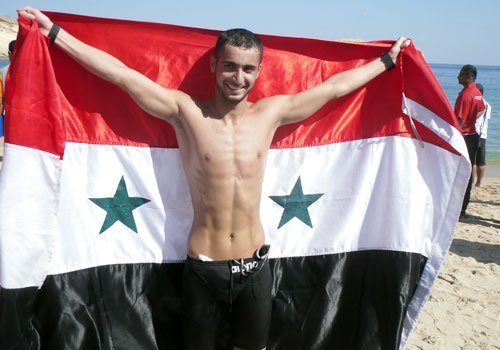 Many teams brought a full complement of swimmers like the USA with Brendan Casey, Andrew Gemmell, David Heron, Simon Lamar, Chip Peterson, and Jordan Wilimovsky, but many other teams were represented by only one swimmer.

The Syrian Arab Republic and Angola were two of those nations. Angola sent Pedro Pinotes who finished 47th in the 5 km and 54th in the 10 km race.

While Syria is currently not ideal for training purposes, the 31-year-old Mohammad has long competed on the FINA Open Water Swimming Grand Prix circuit and has been most recently training in Bulgaria under a Russian coach. “He looked especially tired today [in the 25 km],” said long-time FINA officials.

But true to his nature, Mohammad finished the race that he started despite the obstacles in his path.