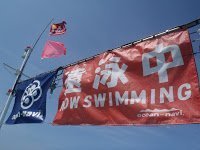 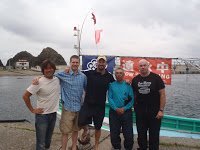 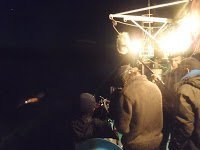 Like all the other Oceans Seven swims, channel swimmers around the world are gearing up for the Tsugaru Channel. In addition to the good number of Japanese relays with masters swimmers, channel swimmers from South Africa (Roger Finch), Spain (Miquel Suñer Comalat), Guatemala (Yesenia Cabrera Fuego), USA (Brad McVetta) and England (Adam Walker) are making plans to swim from Honshu (where Tokyo is) to Hokkaido (where Sapporo is).

Captain Mizushima (shown above with Ocean Navi‘s Masuyuki Moriya, Darren Miller and Stephen Redmond) and crew are ready to welcome the guests to their fishing hamlet of Tappi Misaki at the northwest tip of Honshu.

Photo on left by Ocean Navi shows Stephen Redmond being filmed for the Oceans Seven Project by Red Bull Media House. Red Bull’s documentary on Redmond’s Oceans Seven challenge and his final assault on the Tsugaru Channel is nominated for the 2012 World Open Water Swimming Offering of the Year.

The nomination of the Oceans Sevens Project reads, “Red Bull Media House captured the essence of the open water swimming world when its documentary film crew traveled to Japan to film the Oceans Seven Project, the unprecedented completion of the world’s most difficult open water swimming challenge by Stephen Redmond. Their dramatic film, centered around Redmond’s attempts on the Tsugaru Channel, required 5 men hanging on for their lives in rough seas to film the Irish icon as he was tossed, bruised and battered in the turbulent seas in the North Pacific. Through its ability to document and glorify the exploits of athletes in extreme sports, Red Bull has lent its formidable global presence to the open water world where high risk is an inherent element of the sport. For its investment in the sport, for their risk-taking decisions to follow Redmond without any guarantees, for its breath-taking footage in a real-word drama that ended in success, the Red Bull Media House Oceans Seven Project is a worthy nominee for the 2012 WOWSA Open Water Swimming Offering of the Year.”