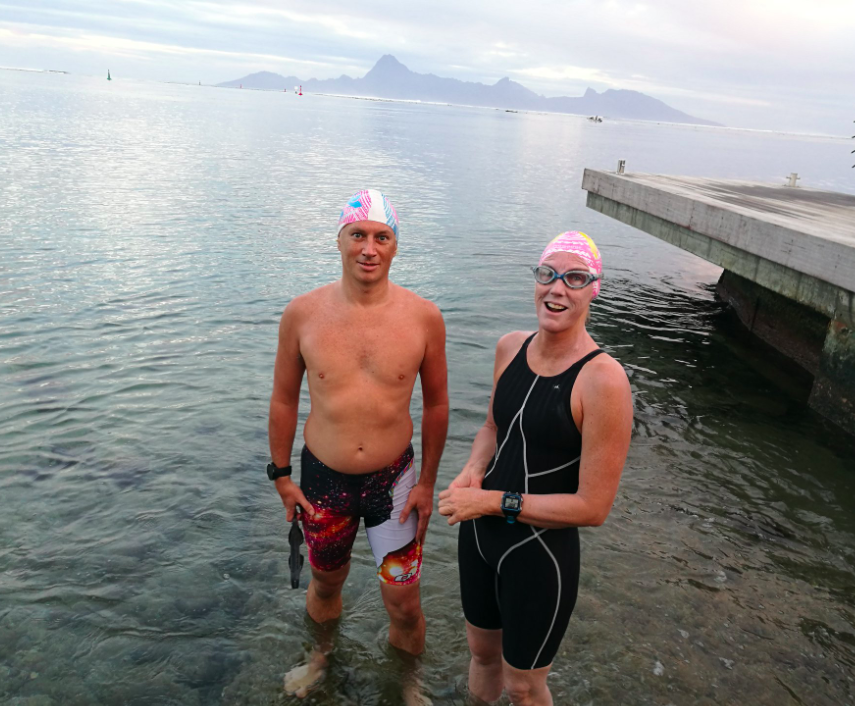 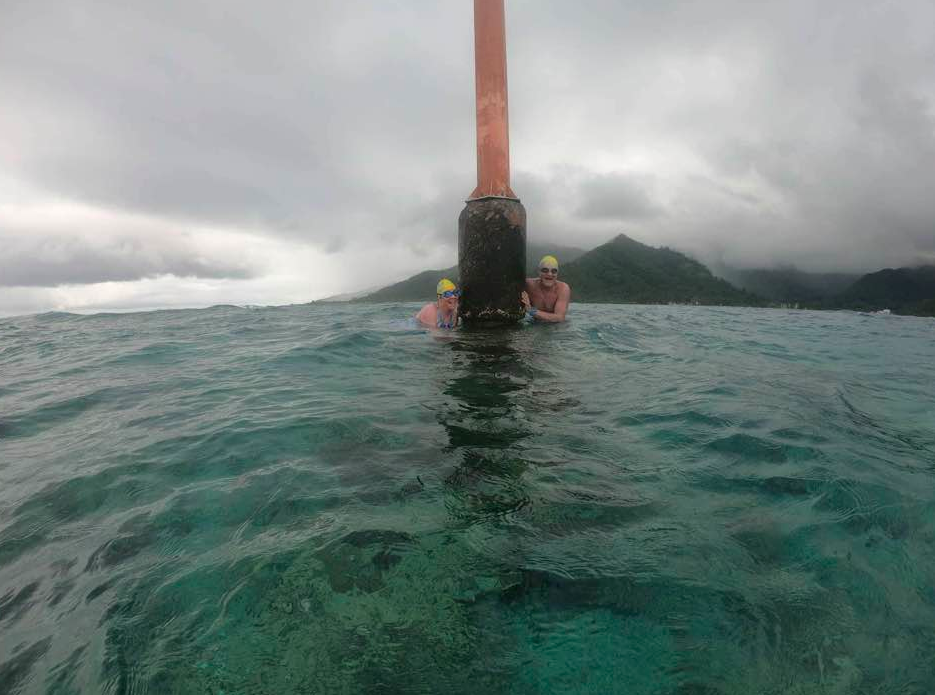 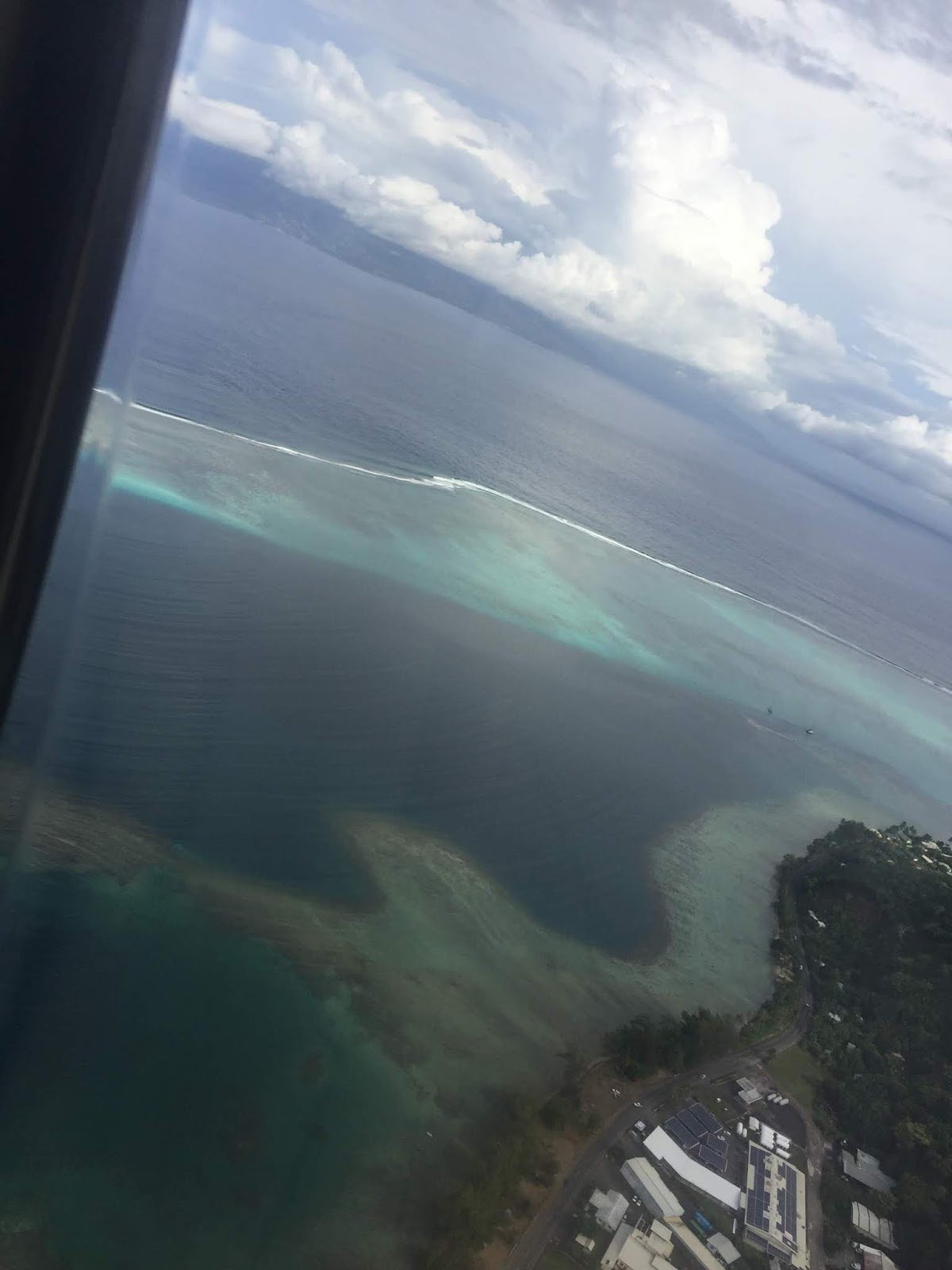 Saison 3 of the 2019 Tahiti Swimming Experience will include a 20 km cross-channel ocean swim between Ta’apuna on Tahiti and Plage de Tema’e on Mo’orea in October 2019.

The stage was set by Seti Afoa of Samoa Swim Series who organized the first land-to-land Tahiti to Mo’orea channel crossing on October 7th.

Afoa, who also organizes the Apolima Strait crossing in Samoa every July, organized the 19.5 km channel attempt for Christina Harris and Mike Cochrane with observer Roger Matheson. He reported the crossing, “The start was at the Manava Suite Resort and the swimmers finished at Marina Reserve at Vai’are on Mo’orea.

Sunday offered the best conditions for the [channel] swim which was also the only day I had allocated for the test swim. Obviously there were reserve days in the bank should we needed to change, but October 7th was the preferred option.

Everything was then set for a start early the next morning.

Mike and Christina started the swim at 5:47 am with plenty of daylight [as] sunrise was 5:36 am. The course was straightforward, [they] swam through the channel to the channel marker 1.3 km outside the reef with the outgoing tide in 14 minutes.

Then it was a 17 km straight line to the Mo’ore’a (Vai’are) channel marker and from there to finish on the east side of the Vai’are Marina.

The wind forecast was 8 knots and increasing to 13 knots in the afternoon. It was from the east which meant the first half of the swim was relatively calm on the leeward side of Tahiti. Once out in the open wind flow tendered from the north and eastward toward Mo’orea. The effect was wind assist at a relative rate of knots.

Tide assistance was the biggest influence on the swim surging from the south and pushing the swimmers north east towards the desired destination. The course outlay lends itself to this layout of north east direction. The chop did rise in the afternoon which for Mike and Christina was at the end of their swim. The plan was for the swimmers to reach the channel on Mo’orea before the tide turned at 11:45 which would make swimming into the channel a near mission impossible.

Starting at 5:47 when we did meant the window of ease was relatively small to reach Mo’orea in less than 7 hours. Being the first time for this swim, we had no data to go on with time frames of swimming land to land. Previous Tahiti-Mo’orea swims that are recorded were channel marker to channel marker. Our agenda was land to land, the unknown factor was entering the channel with an outgoing tide and what effect that was going to have. The other factor was with the tide cycle.

Christina and Mike reached the Mo’orea/Vai’are channel marker at 12:10 pm and just after the tide turned. Fortunately, the big emptying of the lagoon into the wide ocean was only beginning and the swimmers were able to negotiate themselves through the channel with relative ease. One thing to note here is the tide cycle we had chosen for this swim. It was on the high side at 3 meters on high, high tide at low tide cycle is 1.2 meters so there is a major difference in the volume of water in the channel between the two cycles. We learnt this lesson with Apolima Strait where all our swims are now on the low end of the tide cycle.

The finish was the worst part of the swim. It is not pretty at the exit point, but when you have just swum [nearly] 20 km any land is a great sight. The swimmers finished side by side, total time was 6 hours 44 minutes with a [total cumulative distance] reading of 20.5 km

[But] they also had the worst of the conditions and circumstances. They were not able to start with Mike and Christina at 5:47, due to boat non-arrival. They then left with the test swim boat and were 5 km toward Mo’orea when the replacement boat turned up. They had no hesitation in returning to the channel marker 5 km away to start their swim shortly before 8 am and two hours behind the test swim.

It meant they got the worst of the afternoon conditions. Bex swam with them for 10.2 km, that too was amazing given the limited swimming for her. As rough as the conditions were, they were more than equal to it. They did the crossing from channel marker to channel marker in 8 hours 13 minutes. This is an amazing achievement for relatively new ocean swimmers