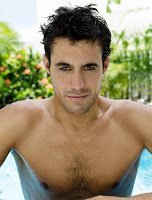 Australian open water swimming superstars Brendan Capell (on left) and Ky Hurst have been busy giving back to the sport that they have devoted much of their lives.

The duo is organizing the The Great Brisbane Swim on November 21st as the first of a 3-swim series.

At Brisbane’s Suttons Beach Redcliffe, there is a Junior Kid’s 0.3K swim followed by two separate 2.5K swims where everyone receive a great goodie pack with Body Science products.

Australian Olympic heroines Susie O’Neill and Melissa Gorman will also be at the inaugural Body Science Great Australian Swim Series helping open water mates Brendan and Ky. “After traveling the globe competing in the best ocean swimming events and national ocean swimming series established in New Zealand and the United Kingdom, Brendan and I thought it was time to launch a series in Australia where we really can take advantage of our great water and swimming lifestyle,” said Ky.

Brendan echoed his comments, “This sport has given us so much, we want to encourage the wider community to take the plunge. Whether entrants train on a daily basis or have not swum since high school the event caters for all levels with swims ranging in distance from 300 meters to 2.5K. What better way to spend a summer morning then participating in an ocean swim in some of Australia’s best locations throughout the series?”

Greg Young, Director of Body Science, explained why his company became a title sponsor, “We have been wanting to get involved in a sports water event for some time and we saw the boys concept is a great fit promoting health and exercise on a mass participation level.” In addition to the Great Brisbane Swim, Brendan and Ky are organizing the Great Sydney Swim with the goal of generating awareness and promoting the benefits that exercise can have on a positive state of mind and balanced lifestyle.

“As ocean swimming is the sport we are passionate about, it is great that we are now able to provide people with an opportunity to pursue a healthy and active lifestyle through our swims.”