Take Your Zinc In The Open Water 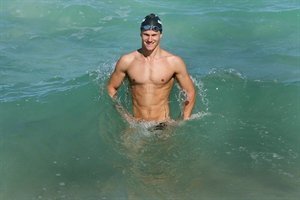 When we observe open water swimmers apply sunscreen before they swim, we often notice they smear sunscreen on their face and perhaps on their arms and a bit on their shoulders. But their backs and legs? Usually not.

Is this wise, especially for a sport where its athletes are fully exposed to the harmful elements of the sun?

Perhaps not, especially if you live in one of the five skin cancer hot spots around the world:

One of the best elements that we look for is compounds like zinc oxide or titanium dioxide in the sunscreen. While these compounds generally make the skin a chalky white (and therefore undesirable by most swimmers), it does act as a barrier on the skin and prevents the harmful light from absorbing into the skin.

The second thing that we look for in a sunscreen is its biodegradability. A biodegradable sunscreen is environmentally friendly because they break down naturally in the environment and lacks the harmful ingredients that destroy the world’s coral reefs.

Photo shows Rhys Mainstone of Australia who will be competing today in sunny Cozumel, Mexico at the FINA 10K Marathon Swimming World Cup.