Taking Advice On Open Water Swimming With A Grain Of Salt

Taking Advice On Open Water Swimming With A Grain Of Salt

Professor Kimberly Prather is an Atmospheric Chemist, Distinguished Chair in Atmospheric Chemistry, and a Distinguished Professor at the Scripps Institution of Oceanography and Department of Chemistry and Biochemistry at University of California San Diego. Her recent warnings are a stern admonition to all those who not only enjoy recreating in the ocean like swimmers and surfers, but also to those who work in it like fisherman and crews on cargo ships and yachts.

Her work focuses on how humans are influencing the atmosphere and climate. In 2019, she was elected as a member of the National Academy of Engineering. She is an elected Fellow of the American Geophysical Union, the American Association for the Advancement of Science, and the American Academy of Arts and Sciences.

In the early 1990s, she began to work on and patented aerosol mass spectrometry. A decade and a half later in 2010, she became the founding Director of the National Science Foundation Center for Aerosol Impacts on Climate and the Environment. Dr. Prather develops new analytical techniques for aerosol chemistry and demonstrated that dust and aerosols in the Sahara can influence precipitation in Western United States.

She also studied the microbes that rise from the ocean, become airborne, and contribute to the global temperature. Her experiment included storing thousands of gallons of water from the Pacific Ocean, provoking wind and waves, and encouraging the growth of organisms. She and her colleagues were able to identify the major factors controlling chemical composition of sea spray. They demonstrated two types of droplets; “film” drops that were full of microbes and organic materials, and “jet” drops that mainly contained sea salt and other biological species. 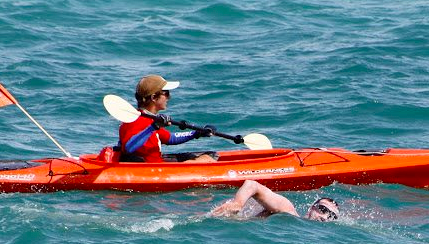 What Dr. Prather forewarns to environmental reporter Rosanna Xia of the Los Angeles Times is chilling, “I wouldn’t go in the water if you paid me $1 million right now. [The coronavirus] could [kill you] if you go out there and get in the wrong air,” she explained why the beach is one of the most dangerous places to be in these days when the novel coronavirus has shutdown California.

Prather fears that SARS-CoV-2, the virus that causes COVID-19, could enter coastal waters in similar ways and transfer back into the air along the coast.

In her research, Dr. Prather discovered that the crash of big waves along the California coastline leads to ocean sprays that spread particulate and microscopic pathogens into the air. Xia reported, “She believes that this new coronavirus is light enough to float through the air much farther than we think. The six-feet physical distancing rule, she said, doesn’t apply at the beach, where coastal winds can get quite strong and send viral particles soaring.”


Dr. Prather may be the first to warn that the virus can be spread by ocean spray or coastal breezes due to her belief that the coronavirus is contagious by air. Swimmers and surfers know what happens with they are in the surf break zone when foam and ocean spray get kicked up when waves crash. Prather said, “All that stuff — the viruses, the bacteria, pollutants, all the gooey, oily stuff — just launches into the air. Once things are in the air, they can go pretty darn far. People are shocked whenever I talk about stuff becoming airborne. I see pictures of the beach shut down, and the signs tell you don’t walk on the beach, don’t swim, don’t surf, but nobody tells you: Don’t breathe.”

While scientists do not know for certain if the virus can survive in saltwater, they know that pathogens like hepatitis A can survive in the ocean. “That being said, I don’t know of many open water swimmers who have caught hepatitis A in the ocean or while walking near the shorelines,” observed Steven Munatones.

Reading public comments and opinions about Dr. Prather’s warnings runs the gamut from “show me proof and more data” to 400 examples of “necrotizing fasciitis in Florida where ocean goers were infected with flesh-eating bacteria“.

With nearly 40% of all Americans living near a coast in the United States, if Dr. Prather’s beliefs are true, her predictions are a chilling threat to not only the lives of 131 million Americans, but every human on the planet who lives near oceans and seas around the world.

Can things really be that bad? With the coronavirus reportedly living in the air, surviving in saltwater, and being transported by wind and ocean waves, ocean goers and billions of people around the world are waiting for the outcome of Dr. Prather and her colleagues’ research in their well-financed center funded by the National Science Foundation.