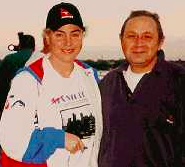 “[It is] very sad to lost a great friend and human being,” said Antonio Argüelles about Nick Olmos-Lau who last worked as an officer for the U.S. Department of Veterans Affairs after a long and successful medical career.

Elizabeth Fry sadly agreed about the doctor much loved and widely respected in the medical and open water worlds who was always available to unselfishly lend his expertise, experience and talents with others, “We have lost a great man who was born in Mexico City. I was blessed to have known him.”

He passed away on March 9th in Miami at the age of 72 after nearly three years fighting a rare form of lung cancer and during a hospitalization for acute respiratory distress syndrome.

He celebrated his 49th wedding anniversary to his wife Nancy Thomas shortly before his death.

Born in Mexico City in 1945, he studied medicine at Universidad Nacional Autónoma de México where he was ranked first in his graduating class. After studying in London and completing his neurology residency training and fellowship in the United States, he served in the U.S. Army and moved to Washington D.C. where he practiced adult neurology and ran the EEG lab at George Washington University. He also worked for the U.S. government at the FDA and Veterans Affairs.

The member of the Potomac Valley Masters team made his English Channel crossing in 2001 a family affair with wife Nancy and daughter Lisa on his escort team. With his 13 hour 41 minute crossing, he completed the Triple Crown of Open Water Swimming after a Catalina Channel crossing and three Manhattan Island Marathon Swims.

Dr. Olmos-Lau is shown above with Susie Maroney.