Tapering For A Shot At The World Championships 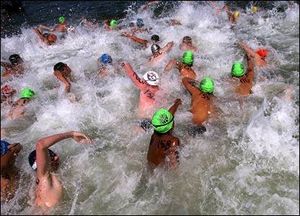 A few of them are odds-on favorites to swim in the lead pack, a handful of others have a realistic chance to earn a spot to represent the USA at the 2013 FINA World Championships, and all of them have long-term dreams to earn the right to wear the red, white and blue of their country in future international competitions.

As the level of athleticism rises, and the speed gets faster, the swimmers must prepare themselves to keep up with the competition. This means swimming faster in workouts, getting physically stronger, and tactically smarter. And proper preparation also requires an optimal taper.

“Taper is music to most swimmers’ ears,” smiled Ashley Twichell who is tapering herself for the 5 km and 10 km races in Castaic Lake this coming weekend. “After logging hours upon hours, and miles upon miles, in the pool on a daily basis, it is no surprise we look forward to taper with great eagerness.”

A taper is a reduction in the amount of time and distance swum by swimmers in preparation for a major competition or solo swim. However, a taper can mean different things to different coaches and swimmers, depending on their age, degree of competitiveness, goals, and amount of mid-season training. As with many things in the open water, there is less of a right way or wrong way to taper; rather, it is what works best for each individual.

In the pool, it is common for sprinters to taper more than distance swimmers. Similarly, it is more common for older individuals to rest more than a younger athlete, and for a 5K swimmer to taper for a longer period than a channel swimmer. Those who swim longer distances need to maintain their aerobic base more. In addition, men typically taper more than women, since they generally have more muscle mass that needs to be rested and given time to recover. With experience and experimentation, the length and intensity of a taper is often altered, modified and adapted by every swimmer.

At open water competitions, athletes do different things in the days leading up to the race or solo swim. While some athletes continue to swim a decent amount of yardage, others significantly back off. Some will work on speed, others will work on techniques, others will primarily rest, sleep and eat. But in nearly every case, the athlete’s total distance will decrease in comparison to their usual workload. The amount of time before the race that the athlete chooses to start to come down in yardage will vary, but it is typically anywhere from 1-3 weeks.

Another common aspect of taper found among the majority of competitive open water swimmers is a renewed focus on speed work. While in season, many endurance athletes will tend to emphasize volume to develop an extremely strong aerobic base. However, as an important race draws near, it is crucial for athletes to give their bodies and muscles an opportunity to recover, and become more fine-tuned for speed. This speed is essential for a strong finish in a race. In addition, with less distance swum in practice, athletes have more time to focus on technical aspects of racing, including starts, turns, finishes, pacing, navigation, positioning, feeding, and a navigational understanding on the race course or solo crossing.

A standard taper is gradual over 1-4 weeks. However, a drop taper is short and sweet. It refers to the method of taper that a swimmer uses when they want to perform well in the meet and/or race, but it will not disrupt their long-term training too much. The athlete will continue to train normally until two or three days before the event, and then literally drop their yardage to a dramatic degree in preparation.

The goal is to allow muscles to have some time to recover and rebuild, augmented by a somewhat refreshed feeling – both physically and mentally – for the race. Like everything else, a drop taper can be very individualized. It may work great for some swimmers, and actually have a negative effect on others.

For many athletes, taper can be just as much mental as it is physical. Many athletes either worry that they are not tapering enough, or tapering too much. However, if the athletes are able to put trust in their coaches, themselves, and the work they have done all season long, chances are they will perform well.