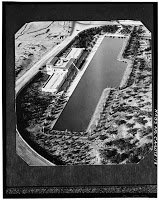 Well before there was POW (Pool Open Water), there was the Fleishhacker Municipal Swimming Pool in San Francisco.

Opened in 1925, the world’s largest heated salt-water pool was closed in 1971. 305 meters in length and nearly 50 meters at its widest point, the pool held 24.6 million liters of filtered seawater pumped in from the Pacific Ocean and was maintained at 72°F (22°C).

Up to 15,000 spectators lined the deck of the pool to watch swimming heroes like 5-time Olympic gold medalist Johnny Weissmuller, who set 67 world records during his career before he was known as Tarzan, take to the rather chilly salt water.

Gerald Macedo, a world-class swimmer and retired coach, remembers, “It was important to have a sleeping bag to cozy up in between races because it was so cold in and out of the water.”

Cold water was apparently something Tarzan did not have to worry about in the movies – he had other things to wrestle with: