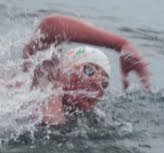 Fionnuala Walsh became the first Clare swimmer and the 15th Irish woman to successfuly swim the English Channel. She was escorted by veteran pilot Paul Foreman on the Pace Arrow during her 15 hour 26 minute journey this week.

But Walsh’s success was built on the foundation of fate. In early August, she was one of 3 swimmers who was met with an impregnable wall of fog as she approached within 200 meters of the shore of France. Helpless in the cold water, Walsh’s swim was over when the dense fog hung in the air essentially separating her dreams from the French shore.

On August 9th in an event unprecedented in English Channel swimming history, Walsh swam nearly the entire way across the English Channel and was roughly 200 metres from the finish at Wissant Beach in France when her swim was aborted on safety grounds. She was not permitted to walk on to the beach to officially complete the swim. A dense fog had covered the English Channel that night and it was judged to be unsafe to proceed toward the shore alone with a dingy to officially complete the swim. Two other swimmers suffered the same cruel fate that night. On her second attempt on October 9th, she returned to Dover but Mother Nature was again unkind. However, she completed an official crossing of the English Channel in 15 hours 26 minutes under the escort of Paul Foreman.

Nick Adams and his colleagues at the Channel Swimming & Piloting Federation often say, “When things don’t go to plan, you have two choices: give up or try again. It’s what one does with setbacks that makes us who we are, and this is where true heroes shine through.

This morning Fionnuala Walsh slipped into the cold Channel waters to complete her dream, which was dashed two months earlier by fog, a couple of hundred metres from French sand. She kept the swim low profile, but swam a brilliant swim today, and finished in 15 hours and 26 minutes. Fionnuala is an example to us all
.”