Teaching Open Water To The Next Generation 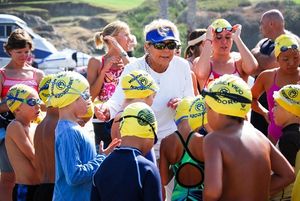 Teaching Open Water To The Next Generation

Parents and coaches often ask how their young athletes can develop a passion and yearning for the open water.

These 10 relatively easy steps to a good start:

1. Develop a love and appreciation for the coastline and shoreline. Allow the children to play at the lake, sea, beach, ocean, and river – rather than look at it as a workout. Enjoy a barbeque, picnic, party on the beach before organizing a hard-core open water workout.

2. Share stories with them about the heroes of the sport and their fantastic accomplishments [see below]:
* Maarten van der Weijden working the Olympic 10K Marathon Swim at the 2008 Beijing Olympics
* Lewis Pugh swimming at 5,181 meters on Mount Everest or across the North Pole
* Lynne Cox across the Bering Strait
* Ferry Weertman winning a close race over Spyridon Gianniotis at the 2016 Rio Olympics in Copacabana Beach
* Natalie du Toit‘s qualifying for the Olympic marathon swim despite not having a leg
* Craig Dietz‘s open water swims despite having no limbs

4. Teach them about sailing concepts, tides, currents, and eddies.

8. Ask the kids to paddle or kayak for their teammates first; enable them to guide/escort other swimmers. This will give them an appreciation for helping others.

9. Teach them excellent technique, both for the pool and open water.

10. Teach them the vernacular of open water swimming: 3,273 terms are posted here.

Photo above shows renowned coach Siga Rose teaching the next generation of Mission Viejo Nadadores swimmers about the open water.

Driven, a documentary about channel swimmers: