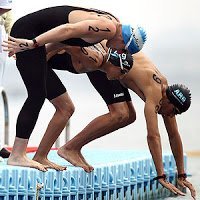 Started in Europe as part of the LEN Championships in the last century, a new team event has been catching on in the open water swimming community.

At the last FINA World Championships in 2011 in Shanghai, the 5 km team pursuit (team time trial) showcased a tremendous battle of speed, stamina, and strategy among the various national teams, each that employed a different formation.

In a nail-biting finish, the American team of Andrew Gemmell, Ashley Twichell, and Sean Ryan etched out a gold medal victory of the slightest margins over the Australian team of Ky Hurst, Melissa Gorman, and Rhys Mainstone over the 2-loop course. 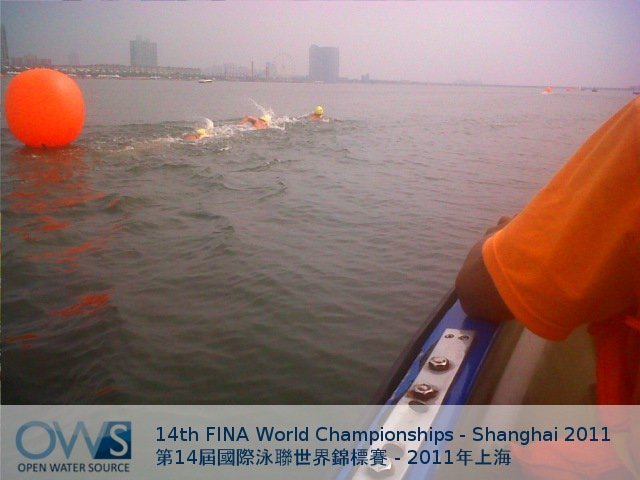 During the team pursuit race where the 3-person mixed-gender teams were started 60 seconds apart, Andrew Gemmell pulled the American train in about as straight an arrow as one could possibly do. Gemmell lead his Team USA teammates, Twichell and Ryan in an unwavering streamlined formation throughout the course to win in 57:00.6. Ryan remained in the middle while Twichell give it her all by trailing the men right on their toes. The trio never got out of position and held tight to gain the optimal advantage of drafting. Gemmell occasionally sighted to confirm his direction as his teammates literally followed in his wake.

Meanwhile, the Australian team had a different strategy with 2-time Olympic waterman Hurst slightly ahead on the right with Mainstone handling the left flank and 2-time Olympian Hurst, Gorman sandwiched in the middle. With a time of 57:01.8, the Australians just barely missed out on a gold.

The bronze-medal winning German team had a similar formation to the Australians with Jan Wolfgarten and 2-time Olympic medalist Thomas Lurz leading Isabelle Haerle who finished in 57:44.2.

The rest of the national teams swam in various formations in the team pursuit with the most popular being two men in the front swimming side-by-side and the woman in the middle. But it was clear that the pencil-shaped formation served the Americans best. It will be interesting to see how the powerful Italian team executes their strategy at the upcoming 2013 FINA World Championships. Together with the Americans, Germans, and Australians, the Italians are considered solid gold medal contenders.

What will be most interesting is if Martina Grimaldi is selected to participate in the Italian team pursuit trio. She is already slotted to participate in the individual 5 km, 10 km, and 25 km races. If the Italian team elects to utilize her services for the team pursuit event, she will compete in a total of 45 km at the World Championships – an unprecedented and unheard of feat of stamina, strength, speed, and skill.

Team pursuit or team time trial races generally between events over 5 km that can be loop, out-and-back or point-to-point courses open to swimmers of all ages, backgrounds and abilities.

In the team pursuit, athletes swim closely together with teammates whose number varies race to race. In the European Open Water Swimming Championships and World Swimming Championships, the number of athletes is fixed at three individuals: two of one gender and one of the other gender. Teammates start, swim and finish together with each team set off in separate staggered starts. The staggered starts can be 10 – 60 seconds apart depending on the race.

As in cycling, the Team Pursuit encourages swimmers to form an aquatic peloton and utilize all the requisite drafting, positioning, navigating and pacing skills of open water swimming. The Team Pursuit places a premium on drafting, positioning, navigating and pacing. The closer and straighter the swimmers swim together, the faster their time will generally be.

Rules
* The Team Pursuit start can be on shore at the water’s edge, from a fixed or floating pontoon or in the water.
* The Team Pursuit can be done in either the clockwise or counterclockwise direction, depending on the course layout.
* The Team Pursuit finish can be on shore at the water’s edge or through a finish chute, at a fixed or floating pontoon structure or a rope in the water on the water’s surface.
* The Team Pursuit finish time is the time that the last swimmer of the team crosses or touches the finish line.
* The swimmers can swim as close to one another or as far apart from one another as they wish. However, their final time is the time of the last swimmer.
* Each team is separately set off in staggered starts that can range from 10 – 60 seconds depending on the race and the decision of the Race Director. Each team will be set off in equal intervals (e.g., between 10 – 60 seconds).
* It is the responsibility of each team to have all their swimmers in their designated starting position at the time their team is set off by the Starter. If all the teammates are not in the designated starting position, the team is still set off and it is the responsibility of the teammates to finish together.
* Each swimmer shall have the same team number. That is, the team members shall be numbered on their shoulders, wrists and backs with the same team number.
* The start list shall be randomly selected before the race and it is the responsibility for each Team to be at the starting line at the appropriate time.
* If one team catches up to another team, it is their responsible to swim around the slower team. The standard rules of open water swimming shall apply at all times. That is, impeding or unsportsmanlike conduct by one swimmer will result in a yellow card or disqualification of the entire team. At any time in the race, impeding other swimmers or teams or committing unsportsmanlike behavior will not be tolerable and will result in a warning, yellow card or disqualification.
* Drafting off of other swimmers or teams is acceptable and part of the Team Pursuit concept.
* Age classifications are determined by the Race Director.
* Athletes from different registered teams may swim together unless mixed teams are not allowed by the Race Director.
* Athletes of different genders may swim together unless not allowed by the Race Director.
* If the race has gender-separate divisions and a team has one male member, then it will be entered as a male team. Only if a team consists of all females is the team defined as a female team.
* Local or national regulations on swimsuits shall apply depending on the decision of the Race Director. If there are wetsuit and non-wetsuit divisions and one member wears a wetsuit, then it will be entered as a wetsuit team. Only if a team has all non-wetsuit swimmers is the team defined as a non-wetsuit team.
* Awards and award categories are the decision of the Race Director.
* For purposes of announcing and awards, each team shall enter a Team Name. Colorful and interesting names are are encouraged.

The Team Pursuit is called such for the following reasons:
* swimmers swimming together in a pack is not a relay in the traditional sense long-track speed skating has made this pursuit concept known.
* the teams start in a staggered start
* pursuit gives the nuance that teams are swimming fast 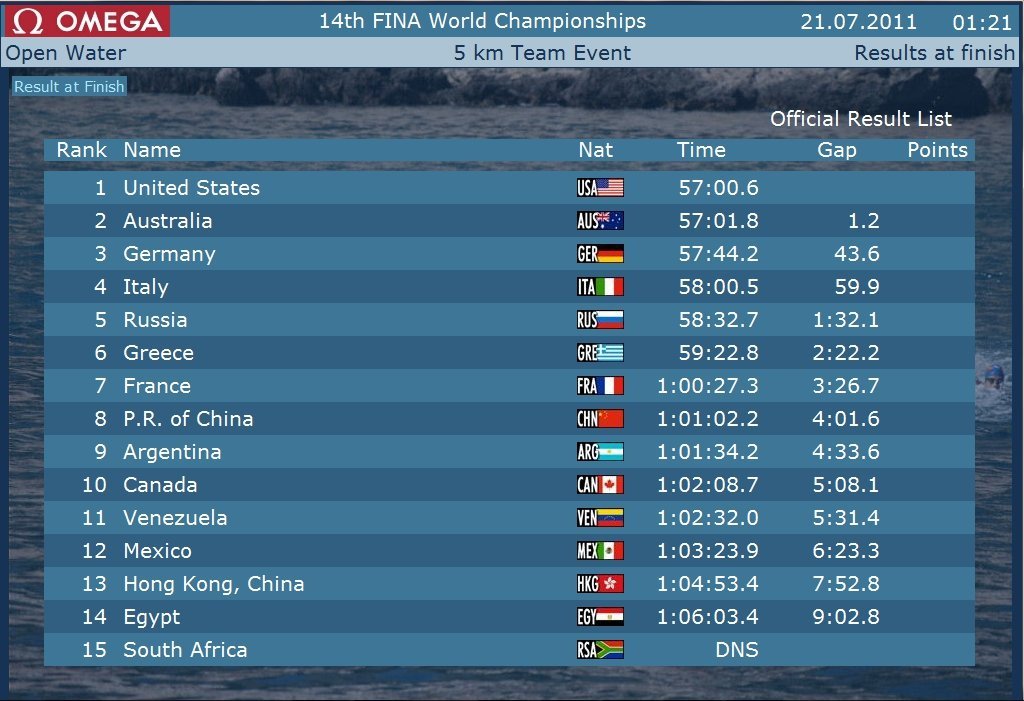