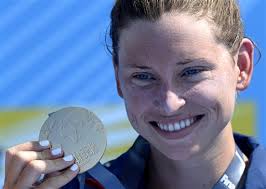 National team coaches have the opportunity to choose whoever they want to represent their countries in the 5 km team event at the FINA World Championships.

Coaches often make that decision based on a number of factors: availability of their swimmers, how they performed in other races, their level of fatigue, and the rest of the program. American head coach Catherine Vogt went with her A team and placed Haley Anderson, the 5 km gold medalist in the solo event, to serve essentially as the anchor of the USA team.

Together with Andrew Gemmell and Sean Ryan, the Americans have a pre-race favorite on paper. But like everything in the open water world, things happen. Plans change. The unexpected is the norm.

But on paper, that American trio looks like a winning combination. With Gemmell taking the lead and swimming the shortest possible tangents between turn buoys and Ryan right on his feet, essentially communicating by soft taps on his feet, Anderson has two savvy teammates who know what it takes to win gold in the 5 km team pursuit. At the 2011 inaugural team pursuit competition at the 2011 FINA World Championships in Shanghai, Gemmell and Ryan teamed up with Ashley Twichell to win gold over the Australians and Germans.

As defending champions, they would like nothing better than to repeat. Tomorrow in Barcelona, the hard-charging Anderson is more than qualified to keep up with the boys. And she is going to be drafting right on their feet as anchor…looking for another gold medal.