Anne Cleveland, one of the featured speakers at the 2010 Global Open Water Swimming Symposium and Conference in Long Beach, California, is an accomplished speaker who has addressed and enthralled audiences from Fiji to Principality of Monaco with messages and themes tied to the open water.

In 2006, Anne swam 6K from Cap Martin in France to Monaco’s Musee d’Oceanographie to promote goodwill in the arts and marine sciences between La Jolla and Monaco. 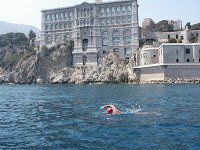 Anne explained about the La Jolla, California – Monaco Science & Cultural Exchange Committee, “Channel swimming is a team effort of a very supportive worldwide community. Everyone works together and great things happen. The same thing is happening here with the La Jolla-Monaco Science & Cultural Exchange Committee. La Jolla and Monaco are joining hands to make great things happen with our arts and our oceans.”