Teamwork In The High Seas 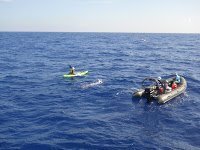 Penny Palfrey announced Team Palfrey, 15 highly experienced and professionals who will escort and protect her from the shores of Cuba to the coast of Florida later this month.

Her medical team includes Dr. Bill Korey, an emergency room physician who has also swum around Manhattan Island, and Barbara Held, a former firefighter and paramedic who spends her retirement years observing for the Catalina Channel Swimming Federation and swimming across the Catalina Channel, Strait of Gibraltar, Tampa Bay and other marathon challenges.

Her escorts on kayaks will include long-time stalwart Jeff Kozlovich from Hawaii, Jesse Gros of Insight Adventures, and Colin Kozlovich, a big-wave surfer from Hawaii.

Her husband Chris Palfrey, Dan Boyle and Brooke Bessert will be rotating a number of duties from preparing feeds, rotating Shark Shields and the myriad duties requires on the escort boats together with her four escort pilots.

She has raised a boatload of funds, organized an international crew, coordinated the logistics involving 4 different countries, put in the training, and will be heading her way to the Cayman Islands this week as a featured guest of the Flowers Sea Swim. While on Grand Cayman, she will make her final preparations before entering Cuba to literally push off Cuba for a 103-mile journey across the Gulf Stream to the Keys of Florida.

Palfrey took nearly 41 hours to swim 67 miles in the Cayman Islands in 2011. This year’s challenge across the Florida Strait will be 36 miles longer. But if she catches the Gulf Stream just right in its northerly direction, and the conditions are reasonably calm, it is possible for her to traverse the waterway safely as the global marathon swimming world watches her progress here.

Whatever the conditions may be and whatever she may encounter en route, her 15-member escort team will take good care of her day and night, and perhaps another day and night more.