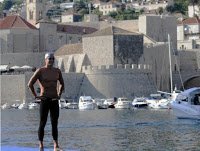 The background information behind the recent technical swimsuit decision in the FINA open water swimming world is below.

FINA oversees the FINA 10KM Marathon Swimming World Cup circuit and the FINA Open Water Swimming Grand Prix circuit – a series of races that are always held in the summer in 11 countries in either the Southern or Northern Hemisphere.

While over 300 different swimmers competed on these two competitive professional marathon swimming circuits, there is a core group of 20 men and women who compete in most of these races. For example, Petar Stoychev swam a total of 303 kilometers over 15 races from January through October in 2009 – in races ranging from 10K to 57K in distance – on these two circuits. Additionally, he competed in the FINA World Swimming Championships, pool meets (he did a 15:28 in the 1500-meter freestyle at the 2008 Beijing Olympics), non-FINA invitational pro races and did a massive amount of tough training in various pools, lakes, rivers, oceans, seas and reservoirs in over 15 countries during 2009.

FINA issued a press release that mentioned the use of certain swimsuits was to protect swimmers from sunburn and jellyfish. This reasoning is based on the actual experiences of these core group of swimmers – like Petar Stoychev (shown above) – who have faced years of extreme sunburns and innumerable jellyfish stings during their competitions. One of the medical and safety reasons behind FINA’s acceptance of the swimsuits is to protect swimmers who compete in its events.

The skin on the backs and arms of these professional swimmers become incredibly sunburned and so painful that they cannot even sit back on their chair or sleep on their backs after their races – because the swims are primarily held during the summertime around the world (whether in the Northern or Southern Hemisphere).

Of course, professional swimmers in the past – from Greta Anderson in the 1950’s to Shelley Taylor-Smith in the 1980’s – have also faced these very same obstacles, and suffered and sacrificed like the generations of open water swimmers before them, but part of FINA’s reasoning to allow technical swimsuits – as is – until June 1, 2010 is to protect the swimmers – many of whom themselves were in favor of technical swimsuits.

There were other reasons considered by FINA prior to the acceptance of technical swimsuits in the open water swimming world, but FINA’s listening to its current group of professional marathon swimmers cannot be discounted.

Recommendations to the FINA Bureau regarding the use of technical swimsuits were partly based on discussions by a 14-member international committee that included an extraordinarily experienced group of open water swimming individuals (swimmers, race directors, coaches and aquatic administrators) who represent 14 different countries and whose mission was to make fair and reasonable recommendations on what they thought was best for the open water swimmers who participate in FINA competitions (i.e., FINA 10KM Marathon Swimming World Cup, FINA Open Water Swimming Grand Prix, World Swimming Championships and World Open Water Swimming Championships).

But, long-term, the new FINA swimsuit rules state that the same swimsuits that were approved for use in 2009 are legal until June 1, 2010. But after June 1, 2010, swimsuits for both male and female open water swimmers cannot cover the neck, extend past the shoulder, nor shall extend below the ankle and must comply with the FINA Criteria for Materials and Approval Procedures.