Ted Erikson On The Next WOWSA Live 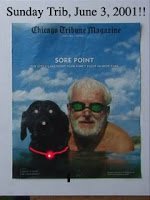 Ted Erikson On The Next WOWSA Live

Ted Erikson, one of the toughest marathon swimmers in history and a 1978 inductee in the International Marathon Swimming Hall of Fame, has a great motto…

But Erikson is back and ready to share marathon swimming stories from his glory days. He is engaging, interesting and ready to colorfully share his wisdom, experiences and insight to the current generation of open water swimmers on the December 8th WOWSA Live.

Erikson’s career started a bit late compared to some, but he certainly made up for any lost time. He started marathon swimming at the age of 33 in 1961 when he became the first person to swim across Lake Michigan in the USA. He then set his sights on the English Channel and swam from England to France in 12 hours 25 minutes in 1964.

His career hit full stride in 1965 with a record double crossing of the English Channel in 30 hours 3 minutes on his third attempt. Never one to give up, Erikson went back and back again until he achieved his two-way goal. His record stood for ten years until it was broken by his son, Jon.

Over in the Pacific Ocean, Erikson still holds the record for swimming 50.6K (31.5 miles) in 14 hours 35 minutes from the Farallon Islands to the Golden Gate Bridge in San Francisco, USA across frigid shark-infested waters in 1967.

During the 1960’s, he competed in eight professional marathon swims in Lake Michigan, Atlantic City, the La Tuque 24-hour relay with Dennis Matuch in Canada and the Traversée Internationale du Lac Memphrémagog in Canada.

Most recently, Erikson was also instrumental in helping provide historical perspective and background information to the new Farallon Islands Swimming Association that is expecting at least six solo swimmers and one relay.

Listen to his words of wisdom and perspective of old-school marathon swimming (20th-century style) and his predictions for the future on the December 8th WOWSA Live.