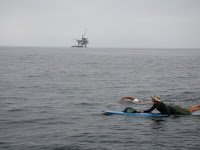 The allure of open water swimming seems to be increasingly attracting the attention of the television media.

The first of thirteen broadcasts of the Speedo Ice Swim Africa is scheduled for October 25th on SuperSport 1 in South Africa.

A 10-minute film about English Channel swimming will be broadcast on the Inside Out programme on BBC1 on November 1st in Great Britain.

Three television documentaries are currently being produced on marathon swimming in the United States for broadcast in 2010.

When filmmakers capture the essence of the sport with visually dynamic close-ups and insight into the minds and motivations of open water swimmers, we are confident that open water swimming will grab the attention of the general public and sporting press.

Photo of Dave Van Mouwerik in the Santa Barbara Channel.