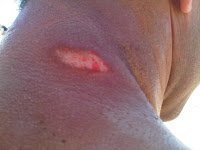 Open water swimming is a beautiful sport where athletes interact with nature in the most raw of situations.

Some things are just unavoidable at times:

1. Toilet Congestion (pre-race): Minutes before your swim and you just “have to go.” You’re holding it in and there is a long line in front of the toilets. Some toilets are permanent structures on the beach or simply portable potties brought in by the race organizer. Either way, as you stand patiently in line, you just can’t wait to make a bowel movement. When you hear the flush of the toilet of the person in front of you, you give a little internal smile of relief. You can relieve yourself in moments. As the person in front of you comes out of the toilet stall or porta-potty with their eyes down and no smile, it is a precursor of your next thought: OH MY…WHAT A STENCH!!! You close your mouth, take a few gasps of air and try to get out of there as quickly as possible.

2. Toilet paper (pre-race): In the stall, besides the stench of intestinal rot and human excrement, it really sucks when there is no more toilet paper left. At least, you’ll be getting in the water soon…

3. Bowel movement (in-race): Maybe you just didn’t have time to go before the race or maybe you just had to go while you are in the water. Whatever the case, it is especially embarrassing if you are escorted or followed by a kayaker, paddler or official’s boat. There is simply no place to hide. With all eyes on you, relieving yourself in the water is always a combination of hiding your actions and what comes out the other end.

4. Bowel movement (neoprene-clad): #3 above is bad enough, but imagine if you are strapped neck to ankle in neoprene. Some things are best left unsaid.

4. Vomit (in-race): Vomit is never pretty, but at least it becomes dispersed in the open water quickly…as long as you keep on moving…or it comes all the way out. The combination of regurgitated food and salt water is almost better than dry heaving. But a partial vomit may be the worst of all as it usually leads to subsequent vomiting of greater volume. Try as you might to get everything out of your mouth during an open water swim, but it usually takes some big swigs of fresh water or a cup of mouthwash to rid yourself of the taste. Nasty.

5. Vomit (post-race): Your friend has just completed a swim, but they are not in good shape. Happy they made it, but they are physically spent. You hug them in support, gently rubbing their back…and then they hurl (puke, spew, upchuck) all over you and your only set of dry clothes. Forgiveness is golden, but you still have to get back home.

6. Stings: Jellyfish stings hurt. Tentacles sent millions of tiny barbs into your sting. Stings are certainly is a badge of honor among the hardiest open water swimmers, but those scabs and scars are unwelcomed reminders of the most heartless denizens of the deep.

7. Chafing: Around the neck, under your arms, on your nipples, between your legs, underneath your swimsuit straps, open water swimmers frequently face the problems of skin-on-skin chafing, fabric-on-skin chafing and hair-on-skin chafing. Scars and scabs can remain for a long time.

8. Lanolin: The white gobs of greasy, fatty substance, extracted from sheep’s wool, are used to coat and lubricate the skin of open water swimmers, especially at the friction points (e.g., underarms, inside thighs, chin and neck, nipples) to effectively prevent chafing. But trying to get the lanolin off at the end of a swim or trying getting it off your clothes is always a mess, especially when mixed with melted chocolate or unused drink powder.

9. Pollution: Trash, garbage, flotsam or jetsam can range from plastic bags and discarded fast-food containers to floating sanitary items and dead animals or diesel fuel and oil slicks. When you run into these items on the water’s surface, you are not only startled, but also disappointed at the actions of the thoughtless individuals who indiscriminately dump their refuse.

10. Boat Waste: While flotsam is always a bummer to swim into, almost nothing can be as bad as swimming into a brown puddle of raw sewage dumped from the self-centered boater who does not follow marine law. As a result, bacteria sometimes enters your system and you spend the better part of the next few days giving homage to the porcelain god.

Disgusting, yes. Repulsive, certainly. Upsetting for sure. But there is one story that may take the top prize:

On the feeding station, a coach started to consume one of his swimmer’s feeds during the race. Suddenly, he realized that the feed was the very last. So…he chewed it up and spit it back into the cup along with his athlete’s fluid and fed it to his swimmer as they came by for the last feeding.

But these gross parts are few and far between the beauty and allure of the open water.

Photo above shows an open water hickey caused by chafing of a wetsuit.