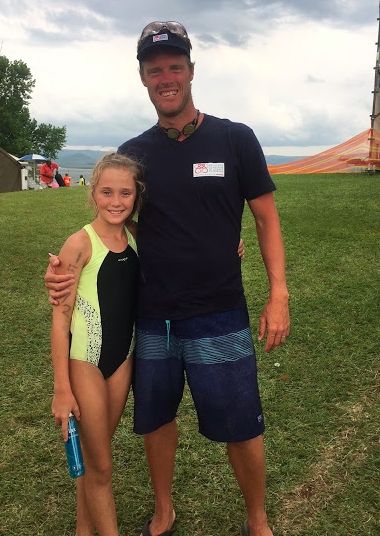 37-year-old Terence Parkin was born deaf, but he has never had a problem getting his name heard around the world.

In addition winning a silver medal in the 200m breaststroke at the 2000 Sydney Olympics, he has been a stalwart at the annual aQuellé Midmar Mile in his native South Africa. One of his Olympics teammates, Charlene Wittstock, became the Princess of Monaco. That relationship continued and Parkin was recently been honored by Princess Charlene of Monaco Foundation as the Global Brand Ambassador for the Deaf and Blind.

Combining his skills and talents, Parkin travels the world including Pakistan, Russia, Australia, China and the Philippines giving talks on water safety and learn-to-swim programs.

Her Serene Highness has grand plans for the Foundation in its global reach, raising awareness about the dangers and preventative measures of drowning. “Terence is an incredible athlete who has shown dedication and passion for his sport, and has never let any obstacles stand in his way on his path to achieve great things. We welcome him to the Foundation, where we know that he will continue to do excellent work.“

One of their former teammates is South African Olympic medalist, Ryk Neethling, who serves as the CEO of the Princess Charlene of Monaco Foundation. The trio have all swum the aQuellé Midmar Mile. “Terence is such a powerful role model for children everywhere, and an inspiration for anyone who is struggling to overcome the odds. I admire his sporting achievements and his subsequent work and look forward to seeing what’s next for him and the Foundation, which does such invaluable work.”

Parkin is shown above with his daughter at the aQuellé Midmar Mile.