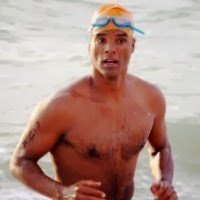 As a former New York City policeman, Thaddeus Gamory has always done the right thing. But Gamory hung up his hoister after 20 years on the beat and is now using his goggles and swim cap instead.

The retired NYPD Police Academy Department Chairman is the owner and head coach of SwimTriPros. But he does so much more from his base in Fort Lauderdale in South Florida. Besides being a certified coach from USA Swimming, USA Triathlon, U.S. Masters Swimming, Road Runners Club of America, and USA Cycling, Gamory focuses on increasing swimming competency among diverse populations as well as the prevention of unintentional drownings.

He also serves as the Triathlon Council Chairman of the Diversity in Aquatics Program where he is interested in finding ways of increasing diversity in triathlons and open water swimming. He coaches a group of athletes from Black Girls Run South Florida, getting them ready for open water swimming and triathlons. “We use innovating training methods and incorporate the ISHOF SafeSwimmer™ Float in our swims.”

Gamory also founded the Safer Triathlon and Open Water Swim group that is part of Broward County Drowning Prevention Task Force and National Drowning Prevention Alliance. “The SafeSwimmer™ is used to to get swimmers over their fears and help them gain increased competence in open bodies of water including the upcoming Swim Miami event.”

Learn About Gonzo Swimming with Matthew Moseley and Josiah Middaugh